Apparently my requested reviews of I, Claudius inspired another reader to donate to my Paypal account and request a review of Fall of Eagles, a 1974 BBC miniseries. So my next couple of posts are going to be looking at this sprawling series. 19th century European history is a good ways outside of my wheelhouse—I’m not familiar with the current scholarship on Imperial Germany or Russia, for example—so watching the series was a fun expedition into a period I know less about than I would like. Unfortunately, that also means that I’m less likely to catch serious errors of fact or interpretation. Hopefully I won’t make too many mistakes in my comments.

Fall of Eagles tells the story of the end of three great empires brought to ruin by the Great War, namely Hapsburg Austria, Hohenzollern Germany, and Romanov Russia (each of which used an eagle in their heraldry, hence the title of the series). It starts in 1848 and runs down to 1918, managing to cover about 70 years of history in 13 episodes. Unlike most miniseries, such as I, Claudius, Fall of Eagles is not a continuous narrative but is more like 13 fifty-minute plays that attempt to show the viewer the reasons why World War I was fatal to these three dynasties. Each episode focuses on one of the three states in question. The three Austria episodes are almost entirely self-contained in terms of their cast. The later Germany and Russia episodes do occasionally have some cross-over, with Kaiser Wilhelm II (Barry Foster) appearing in a couple of the Russia episodes. In some cases, the same actor plays a particular character in multiple episodes, while in others, the same person is played at a later stage of life by a different actor. Like I, Claudius, one fun element is spotting famous British actors in these historical roles. Among the bigger names in the series are Michael Gough, Freddie Jones, Gemma Jones, Colin Baker, Patrick Stewart (in a particularly impressive performance as Lenin), John Rhys-Davies, Miriam Margolyes, and Marius Goring. It’s amusing to watch Alfred Pennyworth plot to smuggle Captain Picard and Gimli son of Gloin into Russia to establish the Soviet Union.

One downside to this 13 short plays approach is that the episodes are somewhat inconsistent in their quality. Whereas most episodes of I, Claudius were written by Jack Pulman and therefore had a consistent voice and characterization, most of these episodes were written by different authors, with the result that the episodes veer in their treatment of various characters. Foster’s Wilhelm II is mostly a vain, foolish man given to absurd gestures such as mailing his cousin Nicholas II (Charles Kay) unwanted allegorical paintings, but in the last episode he suddenly becomes much more reflective, insightful, and serious; in some episodes he loves Nicholas, while in others he thinks the Tsar an idiot. In some episodes the Russian city is referred to as St Petersburg, while in others it’s Petrograd. In one of the Austrian episodes, the emperor is consistently referred to as the All-Highest, following the strict court protocols, but in the other episodes, he’s referred to more familiarly. 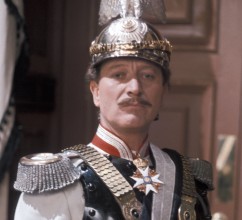 The series has a LOT of story to tell, and sometimes struggles to find a way to convey all the necessary information. The series mostly concentrates on the three royal families, but episode 9, “Dress Rehearsal,” rather jarringly focuses on the Russian Foreign Minister Alexander Izvolsky and his meetings with other European foreign ministers as he tries to orchestrate free Russian passage through the Dardanelles. Most of the episodes employ an omniscient third-person narrator (Michael Hordern), who explains developments like riots and battles as the series shows maps, line drawings, photographs, and early film footage. At other times, one of the characters offers in-story narration in the form of letters or diary entries from their point of view. The result is a valiant but not entirely successful mélange of drama, history lecture, and primary source reading that makes the series half-documentary, half-dramatization.

But if you watch the series closely, you realize that each episode shows one or more steps down the road to ruin. For example, episode 7, “Dearest Nicky,” shows how the 1905 Russo-Japanese War revealed Russia’s profound military weakness and how Wilhelm II tried to use the situation to persuade Russia to abandon its alliance with France and Great Britain. The failure of those negotiations meant that Russia remained committed to going to war against Germany even though it was clear that it lacked the resources to do so successfully. “Dress Rehearsal” deals with Austria’s decision to annex Bosnia-Herzegovina, thereby setting up the motive for the assassination of Archduke Franz Ferdinand (Peter Woodthorpe) in the next episode, and Izvolsky’s failed maneuverings reveal just how politically incompetent Russian leadership was by this point. So unlike most historical series, this one is actually intent on teaching the viewer something about the past more than just telling an entertaining story.

Another problem with the series is that it wasn’t willing to directly depict violence, even when that violence was integral to the story. Episode 4, “Requiem for a Crown Prince,” opens with the discovery that the Emperor’s son and heir has just committed suicide and closes with the narrator basically saying “Oh, by the way, the Empress was assassinated a few years later.” Episode 10, “Indian Summer of an Emperor” culminates in the assassination of the Austrian Archduke, but the whole incident is simply described by someone rather than shown. In the next episode, “Tell the King the Sky is Falling” Grigory Rasputin (Michael Aldridge) is shown becoming an enormous problem for the Tsar’s government, undermining every attempt to solve the empire’s political problems. The following episode starts with the narrator essentially telling us “Rasputin was murdered and thrown into a river.” The whole effect is to somewhat obscure key moments in the narrative by shoving them off-screen. The fate of the Romanovs is only obliquely described by the German empress, leaving the viewer entirely in the dark as to why they were executed. Obviously, standards for violence on television were quite different in the 70s than they are today, but they could easily have shown scenes leading up to the violence and then cut away.

Overall, Fall of Eagles is not as good as I, Claudius, and in some ways it feels a bit like a dry run for the more successful BBC series that came the next year. But as a historical series that actually tried to educate its viewers, it’s an impressive experiment, though one that was never repeated (to the best of my knowledge).

Fall of Eagles is available on Youtube. The series is available through Amazon, but if you decide to buy it, make sure you’re getting a format that will play on your DVD player; some versions only play British and European formats.