(I realized that I had started to write a review of All is True, but neglected to finish it. I’ve forgotten at least one thing I wanted to say about this film, but I figured I’d just post this even though it’s quite brief.)

In 1613, during a performance of William Shakespeare’s play All is True (known today as Henry VIII), a fire started at the Globe Theater where the performance was happening. The fire destroyed the Globe and seems to have had pushed Shakespeare into retirement, since Henry VIII is his last known play. Shakespeare returned home to Stratford-on-Avon and died three years later. Ben Elton’s play and now movie All is True(2018, dir. Kenneth Branagh) looks at Shakespeare’s interactions with his long-neglected family in the  three twilight years of Shakespeare’s life.

When Shakespeare (Kenneth Branagh) comes home, his wife Anne Hathaway (Judi Dench) has a great deal of bottled up resentment over the fact that her husband has largely ignored the family and refuses to share his bed. His daughter Judith (Katherine Wilder) has a simmering anger at him because she feels that he always loved her dead twin brother Hamnet more than her. His daughter Susanna (Lydia Wilson) is married to a Puritan who considers the theater sinful and strains the marriage by making it clear that he has more passion for God than for his wife. The still-unmarried Judith also harbors resentment toward Susanna who has given their father grandchildren.

The family is haunted emotionally by the ghost of Judith’s dead twin Hamnet, who died in 1596 when he was 11. He had written some poems that gave his father a sense that he could inherit William’s mantel as a writer, but then died when an epidemic spread through Stratford while his father was in London. Anne resents William for not returning home to grieve with her, while Judith feels that her father was so taken with Hamnet’s precocious writing skills that he simply ignored her, despite the ample evidence that she was a bright child. Shakespeare too is grieving Hamnet, both as a son and as a male heir to his legacy. Instead of talking about his sorrow, he pours his energy into laying out a new garden.

The basic situation of the Shakespeare family in 1613 is exactly as the film depicts, but almost nothing is known about the emotional life of these characters in this period, so Elton has filled in the blanks by crafting a plausible but slightly too-convenient set of dynamics based around the impact Hamnet’s death might have had on the family. On the one hand, the Shakespeares could easily have been a family torn by their inability to express their various griefs. The fact that Shakespeare was not living with his family in 1596 (because he was in London at the height of his career, earning the money that allowed his family to live in considerable comfort) might plausibly have created a deep rift by making it easy for the family to just not talk about what had happened. 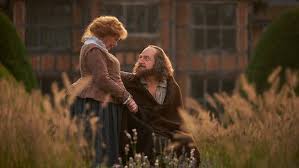 Dench as Anne with Branagh as Shakespeare

On the other hand, the idea that most of the family’s complex issues all stem from Hamnet’s death all feels just a bit too pat. Because as the movie goes on, it slowly comes out that there is much more going on under the surface of the facts than is evident at first. Judith eventually reveals that it was she who wrote the poems that Hamnet gave to their father. All this time that William has been grieving the loss of his son’s talent, that talent has still been there, waiting for him to turn his gaze to Judith. Thus the play draws deeply from Cyreno de Bergerac, with William Shakespeare as Roxanne and Judith playing Cyreno to her dead brother’s Christian. It’s a powerful idea that one of the greatest writers in the English language might have been unable to recognize true talent when it was right under his nose.

But that’s not the only secret waiting to be discovered. As he talks with his family, William begins to suspect that something is rotten in the state of Stratford-on-Avon. As he looks into the details, he realizes that no one else was claimed by the infectious disease that claimed his son, which seems highly suspicious. Eventually he learns the truth that Hamnet committed suicide because he was struggling to learn to read and write, so that Judith’s help in poetry writing has raised their father’s expectations of him too high for him to ever meet. So Judith and Anne have been grieving a double tragedy, unable to share the full truth with anyone.

The film puts gender dynamics at the heart of the story, focusing on the ways in which 17th century society constrained women by denying them education and agency and placing unreasonable demands on them to have sons. In a more egalitarian period, Judith would have grown up feeling that her father was proud of her talent.

All is True is not a great film by any measure. It’s a bit too aware of its prestige status and star casting, and the story it tells is a little too neat in the way all the plots eventually come back around to Hamnet’s untimely death. But it’s a very pretty film loaded with excellent performance, and it’s a treat to see three such celebrated Shakespearean actors playing the real people in Shakespeare’s life and not just the products of his genius.

All is True is available on Amazon.

10 thoughts on “All is True: Shakespeare’s Women”