Fortunately, I was wrong about feeling an aneurism coming on after the first 20 minutes of The Physician (2013, dir. Philip Stölzl, based on the 1986 novel of the same name by Noah Gordon). A little calming bed rest and I’m ready to take on more of the film, which mercifully is less stroke-inducing than the first part, perhaps because I’m a specialist in medieval England and not in medieval Persia, where the rest of the film is set. But that’s not to say that it’s actually a good movie. 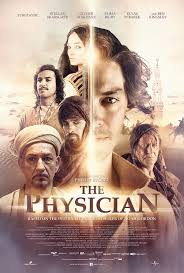 Robert Cole (Tom Payne), the anachronistically-named English protagonist with the magical ability to know if people he touches are going to die, decides that he wants to study medicine with the greatest doctor in the world, so he consults a map of the known world, about 400 years before any such thing existed. Then he sets out for Isfahan, Persia, sometime around 1022.

But he’s been warned that Christians aren’t allowed in Muslim lands. Sigh. Taken as a general statement, this is total bullshit. There was a thriving network of Christian communities across the Islamic world down into the early 21st century, when the Iraq War released forces that devastated Christian communities in Iraq, forcing them to flee.

Unlike Christianity, Islam has fairly precise rules intended to guarantee Jews and Christians a measure of legal toleration as long as they do not challenge Islamic dominance. The basic rules were established by a document known as the Pact of Umar, traditionally ascribed to the second caliph, Umar ibn Khattab (who died in 644), but probably belonging to a slightly later period. According to the Pact, conquered Jewish and Christian communities could receive the status of dhimmis, or ‘protected persons’, provided that they paid a special tax, the jizya, accepted their inferior status, and obeyed a variety of rules that restricted their religious practices in different ways; for example, they could not build new churches, conduct religious rituals in public, and could not try to prevent conversion to Islam or pursue converts from Islam. If they accepted these rules, the dhimmis were permitted to worship according to their religious practices, were generally judged according to their own law, and could do things that were forbidden to Muslims, such as eating pork or drinking alcohol.

These rules are highly problematic in some ways, and are a far cry from 21st century Western notions of religious toleration, but they allowed a substantial measure of peace and prosperity to Jews and Christians most of the time, and were far superior to the options that Muslims and Jews found in most Christian territories. They did not completely prevent conflict between different religious groups; anti-Jewish and anti-Christian violence or legislation periodically occurred. But dhimmi status was a part of sharia law, and therefore was not subject to the whims of individual rulers most of the time, because medieval Muslim society did not accord individual rulers much control over the legal system.

So the movie’s claims that Muslim society did not tolerate Christians at all is, taken broadly, completely false. Noah Gordon is probably just talking (or writing) out his ass.

However, the early 11th century did see a considerable decree of tensions between Christians and Muslims within the Shi’ite Fatimid Empire, which included Egypt and Palestine. For example, in 1009, the Fatimid Caliph Al-Hakim (who died in 1021) ordered the destruction of the Church of the Holy Sepulchre in Jerusalem. He instituted force conversions of Jews and Christians, which is contrary to general Islamic law. His actions were, strictly speaking, a violation of sharia, but Al-Hakim is often considered to have been insane, and the Fatimid caliphs enjoyed greater control over sharia in their territories than other rulers did. 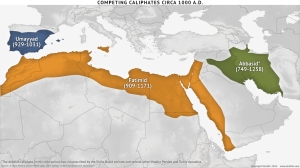 Al-Hakim died in 1021 (unless you’re a Druze and you believe he went into occultation, a state of mystical hiding in which he continues to abide to this day), and the persecution of Christians and Jews came to an end, but since the film is vague about exactly when Rob is making his journey, perhaps he got to Egypt a bit earlier. Or perhaps Rob got out of date information and just didn’t bother to double-check it when he reached Cairo. But al-Hakim’s persecution of Christians did not apply to Persia, which was on the other side of Iraq from the Fatimid state, so the film is still basically wrong on this issue. Rob might have had to pretend to be a Jew while he was passing through Egypt, but once he reached Iraq he would have been able to admit to being a Christian again. I suppose we could say that by the time he gets to Persia he’s been depending on the support of other Jews, so that he continues his deception because he doesn’t want to offend his hosts, but I think that’s stretching things a bit too far.

Because he can’t be an open Christian, Rob decides to disguise himself as a Jew. He adopts the name Jesse ben Benjamin and (wince) circumcises himself. In for a penny, in for a pound I suppose. Exactly why he does this isn’t entirely clear. It’s not like the Jews he meets are going to make him drop trou while they shake his hand, so he could probably get by just by keeping his pants on, which is generally a polite thing to do around strangers.

Once he gets to Isfahan he settles in with a Jewish family there, and at one point fakes his way through a Hebrew table blessing, despite knowing neither Hebrew nor anything about Jewish rituals. At least, there’s no sign he knows Hebrew. Everyone in the film just speaks English, with no indication of what language it’s substituting for. He also miraculously learns to read Arabic at some point, despite not being literate at all earlier in the film when he’s shown an Arabic book. It’s not clear how long Rob spends in Isfahan, so I perhaps we should assume that he just learns to read during his medical studies, but unlike in some films, there’s no training montage to suggest it, and the idea that he mastered Arabic in a year or two is pretty implausible.

But the film does deserve points for exploring, at least in a half-assed way, the way that Jews lived in medieval Persia. The Jews of Isfahan live in a distinct quarter, have their own synagogue, and seem to be allowed to follow their own laws. They engage in commerce and education right alongside the Muslims of the city. We see a Hebrew worship service, and when the synagogue is set on fire, the camera focuses on the burning of the Torah scroll, treating it as the serious loss it would be. The film touches on the fact that Muslims are forbidden to drink alcohol but the Jews are permitted to do so. 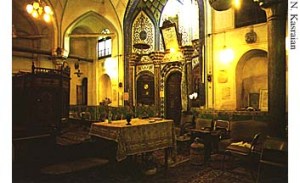 Part of the film’s climax involves a Muslim riot that targets the Jewish quarter. The cause of this riot is rather muddled and cliché-ridden, and I’ll tackle it in my next post, but taken on its own, it’s reasonable example of how fraught with peril the situation of the dhimmi communities could be when religious tensions were inflamed. When they realize the rioters are coming for them, the Jews barricade the entrance to their quarter and defend it until they are overwhelmed, at which point they retreat to their synagogue and barricade themselves into that structure, also unsuccessfully. When the Muslims break in, they light the synagogue on fire and trap the terrified Jewish survivors in the mikvah, the synagogue’s ritual bath. Fortunately, our hero rather improbably manages to save the day.

Overall, the complexity of the religious situation is probably the best thing about the film. Very rarely do big-budget films explore the three-sided religious dynamics of the Muslim world, and even if this film does so rather imperfectly, it’s still interesting. It doesn’t make me hate the movie any less for its godawful opening scenes though.

is available on Amazon. Noah Gordon’s The Physician (The Cole Trilogy)

3 thoughts on “The Physician: Muslims and Jews and Christians! Oh My!”