Sorry I’ve been so long in updating this blog. The past couple of months have been hellishly busy with grading work. I’ve barely had time to get my work done, much less write any blog posts. But I’ve finally gotten through most of the grading and found time to start in on a show I’ve been working my way through, Babylon Berlin (German, with English subtitles), which one of my loyal readers has paid me generously to review.

Babylon Berlin is a 2017 tv production for German tv (reportedly the most expensive television show ever produced in Germany, and I can well believe it), based on a series of novels by Volker Kutscher. It is set in Germany in 1929, a period ripe with change, corruption, and conflict.

The main character, Gereon Rath (Volker Bruch) is a vice cop in Cologne who is sent to Berlin to track down a pornographic film that is being used to blackmail an important politician. A veteran of the Great War, Rath struggles with PTSD and is a morphine addict. He’s also in love with the wife of his brother, who has been missing in action since the end of the war but is not yet legally dead. In Berlin, as he searches for the film, he gets caught up in a conspiracy involving a Trotskyite underground press, a train-load of illegal phosgene gas, a cross-dressing cabaret singer, a shady vice cop of uncertain allegiance, a drug-addled pornographer, a group of Nationalist military officers, and a train car packed with Russian gold.

Gereon also befriends a bright young police clerk named Charlotte (Liv Lisa Fries) who moonlights as a prostitute and aspires to become a homicide detective and who slowly becomes his chief ally as he gets drawn further into the seedy side of Berlin. The show has a sprawling cast of morally-ambiguous characters: Communist workers, Armenian mobsters, homosexuals, Soviet diplomats, industrialists, and war veterans. Everyone has divided loyalties or a scheme they’re running, or a dirty secret to keep hidden. And over the whole thing hang two shadows, the long shadow of the Great War and the faint but looming shadow of the Third Reich.

The Weimar Republic is the name given by scholars to Germany’s interwar democratic government, whose constitution was written in the city of Weimar. Prior to the Great War, the German government was a nominally democratic state but functionally one with a highly autocratic monarchy. Shortly before the end of the war, Kaiser Wilhelm II abdicated and three months later in February of 1919, the Weimar constitution took effect, marking Germany’s first experiment with genuine democracy.

Unfortunately, the Weimar Republic was saddled with enormous problems. It had just lost the worst war in human history, suffering a staggering 1.77 million dead and 4.2 million wounded; of men between the ages of 15 and 38, 13% died during the war. The economy had been stretched to the breaking point by the war, and in defeat, things got worse. The Treaty of Versailles, which ended the war for Germany, imposed harsh annual reparations payments to France and Great Britain that hamstrung the young republic’s economy. In the period from 1919 to the end of 1923, the German Mark collapsed because the government was forced to constantly print new money. The result was hyperinflation, a situation in which prices inflate (or, seen from the opposite viewpoint, the value of the currency falls) on an hourly basis. In 1919, 1 US Dollar could purchase 4.2 Marks; in August of 1923, it could purchase 1 million Marks. This disaster destroyed people’s savings almost overnight and in places the economy reverted to barter. By 1923, the government had managed to bring inflation under control by scraping the old Mark and introducing a new one, the Rentenmark. But the damage had already been done. The Middle Class was traumatized and fearful. 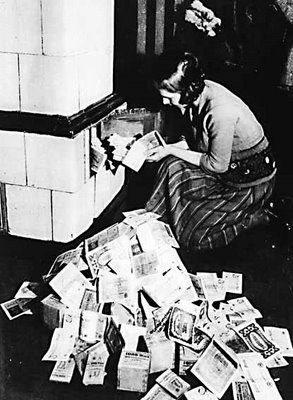 Marks being used as fuel for a furnace

The political situation was also unstable. It proven impossible to establish a long-lasting and stable governing party, and chancellors rose and fell repeatedly, few of them lasting more than two years. Many Germans distrusted their new government, which had been created out of the failure of Kaiser Wilhelm’s government, and many suspected that it had somehow been responsible for Germany’s defeat in the war. Starting in 1930, the President, Paul von Hindenburg, was forced to govern by emergency decree, undermining the government’s legitimacy and paving the way for Hitler’s rule.

This was also an era of plots and attempted coups. In December of 1918, the Spartacus League, a Communist organization, launched an uprising in Berlin that triggered smaller revolts across the country, but it was quickly suppressed by the army. In 1920, the right-wing Kapp Putsch sought to overthrow the Republic and establish a military government, but it collapsed in just four days after a general strike broke out. In 1923, Hitler and General Ludendorff attempted to seize control of the Bavarian government in the Beer Hall Putsch, but Bavarian authorities suppressed it and sent Hitler to jail for a year. After that, things stabilized, but agitation by both right-wing Nationalists, who were a powerful faction within and around the military and left-wing Communists, who were powerful among the factory workers and intelligentsia, continued to agitate and challenge the government in a variety of ways. The Bolshevik Revolution had just happened in Russia, and many felt that there was a very real chance that Communism might establish itself in Germany, while Nationalists dreamed of undoing Germany’s humiliation. 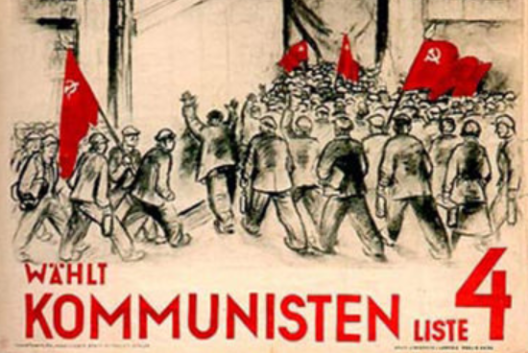 A German Communist poster from the period

But the instability also offered room for society to transform in other ways. Women enjoyed far greater rights than they had a decade ago and a large percentage of them had joined the workforce, either willingly or as a result of the economic problems of the period. There was a strong air of sexual liberation, especially in the big cities like Berlin, and many women turned to prostitution or other forms of sexualized entertainment out of financial necessity. There was a growing acknowledgement of homosexuality, and it was widely tolerated at least within Berlin underworld. Foreign culture was becoming popular, especially American jazz; the black American dancer Josephine Baker was revered in Berlin. German culture entered into a short-lived cultural flowering that produced masterpieces such as the expressionist cinema of Nosferatuand the Cabinet of Dr. Caligari, the irrational work of Dadaist artists like Hannah Hoch and its Surrealist successors such as Max Ernst, and the architectural style of Bauhaus, which was founded in Weimar in 1919. But this new openness to foreign culture was scary to many, and fed into Nationalism, which promised to ‘restore proper values’ and ‘return women to the home’.

The show makes excellent use of its setting. There are extensive scenes filmed outside existing Weimar-era buildings (although many key locations, such as the Berlin Police Headquarters, were destroyed during World War II). The show also constructed a massive backlot set used to represent a variety of neighborhoods around Berlin, including the exterior of the Moka Efti nightclub, a major location in the show. There are a lot of nice touches, such as the fact that the Police Headquarters uses a paternoster elevator system, which were popular in Germany at the time (and still are, to some extent). The show’s art and set direction are also quite good. There are numerous posters in a 20s style advertising musical acts and the like. The Art Deco Moka Efti club really captures something of the style of the period.

The show definitely explores the influence of jazz in German culture. Gereon and Charlotte both love to dance and there are numerous scenes set in various bars and night clubs where the more free style of 1920s dance is demonstrate. No fusty old waltzes for the libidinous Berliners of the era. (One false note is the lack of the black performers who helped bring jazz to Germany, although Josephine Baker’s famous banana skirt is referenced.) Kurt Weil’s Threepenny Opera plays an important role in one episode.

A particularly memorable scene involves the singer Nikoros performing what is essentially the show’s theme song, “Zu Asche Zu Staub” at Moka Efti. The song’s lyrics are both hopeful and ominous and manage to capture the desperate optimism that was so widespread after the Great War. Like everyone else in the show, Nikoros has something to hide. Give it a watch (be advised, the dancers’ costumes border on NSFW). Brian Ferry also cameos in one episode as a singer.

But the show doesn’t exactly glamorize 20s Berlin. The pall of the Great War hangs over these characters. Gereon is haunted by his inability to rescue his brother during the war and his barely-managed PTSD is a major plotline in the show. One of the minor supporting characters is a doctor of psychology who is exploring the potential use of hypnosis to address PTSD, a condition that many people deride as mere cowardice and fakery. Men with missing limbs periodically appear in the background of various scenes, usually begging. Gereon’s partner Wolter (Peter Kurth) is part of a group of soldiers who resent German’s loss in the war and commemorate the dead as heroes, unable to draw the lessons about why Germany lost the war. Gereon’s landlady is a lonely young war widow.

Poverty is ever-present in this show. Charlotte’s family is quite poor; she lives with her mother, grandfather, two sisters, brother-in-law, another man whose relationship to the family I missed, and an infant nephew in what is essentially a two-room apartment. The family’s poverty is part of the reason she works on the side as a prostitute. At the Police Headquarters there is always a pack of young women looking for temporary work as clerks and the like. Charlotte’s old friend Greta (Leonie Benesch) is out of work and homeless when she bumps into Charlotte, who offers her work as a prostitute. This poverty helps the viewer understand the emergence of both Communist and Nationalist agitation as well as the thriving criminal underworld. Most of the characters seem aware that they are lucky to have jobs. 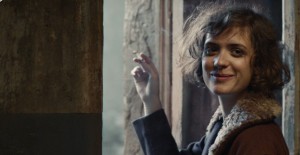 In my next post on the show, I’ll look into the Communist movement in more detail.

Babylon Berlin is available on Amazon if you want to own it, and by streaming on Netflix. The novels by Volker Kutscher are also available: Babylon Berlin, The Silent Death, and Goldstein.

If you’re interested in the Weimar Republic, a good place to start would be with Eric D. Weitz’ Weimar Germany: Promise and Tragedy.