When Shekhar Kapur decided to make Elizabeth (1998), he clearly decided he wanted striking interior visuals. So we see numerous shots of an unidentified palace in which first Mary and then Elizabeth live in. It has tall narrow chambers with pillared arcades, and the pillars are decorated with geometric patterns. It’s definitely a gorgeous set. You can get a brief look at the set in this clip from the film, starting at the 3:45 mark.

Notice the column on the left, with the diamonds, and the one in the middle right, with the chevrons. The column on the far right is composed of multiple smaller columns. Notice also toward the back of the shot you can see that the pillars are actually columns in a rounded arcade with windows above to let in some light. The sense it offers is that Elizabeth’s palace is a long, wide stone hall with extremely high ceilings and massive columns.

But this scene wasn’t shot on a Hollywood set.  It was shot on location. And it wasn’t shot in a Tudor palace. If they had wanted to go that route, they could have filmed here:

Hampton Court was built during the reign of Elizabeth’s father, Henry VIII, who liked it so much he forced the original owner to trade it to him.

Instead, this scene was shot here: 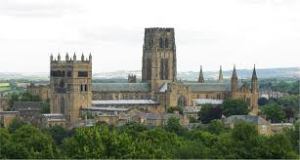 Durham Cathedral was built in northern England in the late 11th century in the Romanesque style, and decorated (uniquely, as far as I know) with massive pillars with geometric banding. It’s one of the most famous churches in England, and easily recognizable because of its distinct style.

Let’s take a look at the interior of the nave:

Note the pillars with chevrons, the composite pillars, the rounded arches, and the clerestory windows letting in much of the light.

That’s right; this film has Mary and Elizabeth using Durham Cathedral as a royal palace.
Actual royal palaces weren’t built with massive columns and high ceilings, and during the Tudor period they generally had wood-paneled interiors, not bare stone. Here’s the interior of the Tudor-era Great Hall at Hampton Court:

The Great Hall at Hampton Court

It’s a pretty impressive space in its own right, and much more indicative of the interior of Tudor-era palaces (because it is one).

I can understand Kapur’s desire to find impressive locations that offered striking interior shots, but did he have to choose one of the most famous churches in all of England? Imagine a movie set in New York City, with a character who lives in a lavish skyscraper apartment, and then the film uses a shot of the Empire State Building for the exterior. Ok, Durham Cathedral isn’t quite as famous as the Empire State Building, but it’s not exactly obscure.