One of the major plots in the second season of Babylon Berlin is a plot to overthrow the Weimar Republic and return Kaiser Wilhelm II to power. It revolves around a coterie of military and former military officers who are working with a wealthy industrialist to build a covert air force in the Soviet Union. Is there any basis for any of this?

Yes, quite a bit.

The Shadow of the Great War

The German military in the 1920s struggled to make peace with its defeat in the Great War. Many of the officers had far more loyalty to their old emperor than they did to the new democratic government. Convinced that the German military was the best in the world (which arguably it was at the start of the war), it was far easier to place the blame for Germany’s defeat on the civilian population than on its own mistakes, Kaiser Wilhilm’s ineptitude, and on the simple fact that by the end of the war it was fighting all the other major industrialized powers almost single-handedly. When defeat became inevitable, the military sought to protect Wilhelm II from the humiliation of defeat by persuading him to abdicate. That way the new Weimar Republic would have to shoulder the burden of surrender. Having thus engineered the surrender of the new government, the military then turned around and blamed the government for surrendering.

The surrender wasn’t just humiliating. It was also shocking. Like all the belligerent nations, the German government had aggressively controlled its press and propagandized the population into believing that the war was someone else’s fault but that nevertheless Germany was just about to win the war. Defeat was not considered possible, so when it came, the population was shocked and confused. If we were winning just a few months ago, why did we surrender?

These forces gave rise to the idea of the Dolchstoß, the ‘Stab in the Back’ theory. This idea maintained that Germany had been defeated from within, that someone somewhere inside the government had betrayed Germany and engineered the defeat of the military. This idea was appealing because it explained Germany’s military failure in a way that freed the military from any blame for what had happened.It created a sense of victimization that festered in German culture throughout the 20s and 30s, especially after the terrifying hyperinflation of 1923. Ultimately, Hitler blamed the Dolchstoß on the Jews, drawing imaginary lines between actual Jews in the Weimar government and a fictitious ‘International Jewish Conspiracy’ that supposedly encompassed bankers, industrialists, politicians, and communists, among others.

To make things a little bit worse, when the Spartacist League staged an uprising in Berlin, the young government turned to the military to suppress it and continued doing so later in the decade, thus legitimizing the idea that the military had a role to play in civilian political affairs. Just a few years later, both the Kapp Putsch and the Beer Hall Putsch included military elements, demonstrating that there was a taste for anti-democratic politics within the German military. The civilian government abandoned all efforts to reconcile the military with the new democratic principles that were supposedly guiding Germany. 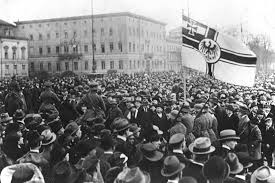 A crowd during the Kapp Putsch

Adding to the military’s resentment was the Treaty of Versailles. In addition to staggering reparations payments to France and Britain that undermined the Germany economy, the Treaty also sought to eliminate the possibility of a future German threat to France and Britain by imposing strict limits on the German military. The German military was allowed to have a total of 100,000 soldiers (three units of cavalry and seven of infantry), with no more than 4,000 officers. The navy could have no more than 15,000 men, six battleships, six cruisers, six destroyers, and 12 torpedo boats. Civilians were not to receive military training and the manufacture and import of weapons and poison gas were prohibited. For a nation that had prided itself on the power of its military, these requirements were deeply unpopular. So it’s no surprise that the military made regular efforts to evade them.

In 1921, General Hans von Seeckt established the illicit Sondergruppe R, a secret group of military leaders who were tasked with evading the Treaty of Versailles’ limits. Sondergruppe R quickly reached an agreement with the Soviets in which the Germans would provide the Soviets with technology and training for the Soviet arms industry in exchange for Soviet assistance in evading the enforcement of the Treaty. The Sondergruppe established a series of shell corporations known as the GEFU, whose purpose was to funnel German funds into the Soviet Union for the creation of tanks, aircraft, poison gas, and other contraband weapons.

One example of this was the creation of the Lipetsk Air Base in the Soviet Union. In this arrangement, the Germans trained Soviet pilots in exchange for the Soviets allowing the construction of a secret air force. In the show, Inspector Rath (Volker Bruch) is sent in an airplane to get evidence of this illegal arrangement by flying over Lipetsk so that photographs can be taken. Although Rath’s efforts to expose this fall apart by the end of the season, the existence of the Lipetsk airbase was eventually exposed in 1931 in an article in the Weltbühne, the same newspaper that Samuel Katelbach (Karl Markvocics) edits in the series.

Sondergruppe R almost immediately began creating illegal paramilitary units, known as the Black Reichswehr. These were civilian recruits of nearly 20,000 who received illegal military training based in Küstrin in what is today western Poland. Because they did not officially exist, the German government could deny all knowledge of them while using them for its own ends. Between 1923 and 1925 France occupied the Ruhr Valley, one of Germany’s industrial centers, to enforce reparations payments in the form of coal and timber. The Occupation of the Ruhr was understandably unpopular in Germany, the Black Reichswehr engaged in sabotage efforts against the French. The Black Reichswehr were also used to commit a series of Feme Murders, a form of vigilante justice directed against those accused of helping enforce the Treaty’s provisions in which vigilante courts would convict someone in absentia and then sentence them to death by assassination. An effort by the Weimar government to enforce the Occupation triggered the Küstrin Putsch, in which the local Black Reichswehr tried to seize control of the city. The Putsch was thwarted by the regular army and the Küstrin paramilitary was disbanded.

But there were numerous other Freikorps groups that fall under the general banner of the Black Reichswehr. These groups appealed to veterans who were worried about the direction the country was moving in, who were hostile to Socialism, or who resented the treatment of the army after the war. The Black Reichswehr also developed ties to numerous more legitimate groups. For example, the Stahlhelm (Steel Helmet) was a veterans organization numbering around 500,000 that helped veterans find jobs and housing. After 1929 it became active in anti-Republican politics. Initially it was a rival to the Nazi Party for leadership of the nationalists in Germany, but in 1933, the Nazi Sturmabteilung (itself the Nazi Freikorps) raided the Stahlhelm’s organization and eventually forced it to merge with the SA and dissolve itself.

In the show, the industrialist Alfred Nyssen (Lars Eidinger) is actively working with Major General Kurt Seegers (Ernst Stötzner) to fund these efforts and import a train-load of phosgene gas from the Soviet Union to help the coup that is being planned. Neither character is a real person, but Nyssen is clearly modeled on Fritz Thyssen, an anti-communist industrialist who increasingly supported and funded Hitler’s efforts, including dismissing all of his Jewish employees, until he broke with Hitler in 1938 and fled the country. Seegers seems loosely based on nationalist general Erich Ludendorff, who led the German army in the second half the Great War. He was active in anti-Republican efforts throughout the 1920s. He participated in both the Kapp and Beer Hall Putsches, and was a vocal proponent of the Dolchstoß theory. He supported Hitler and ran as the Nazi Party candidate for president in 1925, with little success. He eventually broke with Hitler as well.

This review was made possible by a generous donation from one of my loyal readers. Peter, I hope you feel you got your money’s worth! If you would like me to review a specific film or series, please make a generous donation to my PayPal account and let me know what you would like me to review. If I can get access to it and think it’s appropriate for this blog, I’ll be glad to review it.

Babylon Berlin is available on Amazon if you want to own it, and by streaming on Netflix. The novels by Volker Kutscher are also available: Babylon Berlin, The Silent Death, and Goldstein.

If you’re interested in the Weimar Republic, a good place to start would be with Eric D. Weitz’ Weimar Germany: Promise and Tragedy.