I’m in the middle of reviewing Versailles, but I wanted to take a break and review something rather different. Flying Dutchman Films, who brought us the lovely I Am Henry, is back with another short film, Thessalus and Medea. Don’t worry, I’ll be back to the 17thcentury next time.

For those of you who aren’t familiar with the obscure details of Greek mythology, Thessalus is one of the sons of the Greek hero Jason and his witch wife Medea. Greek mythology is a little like comic books these days—there’s no one definitive version of these characters and stories. Greek authors kept going back to the same stories and telling new versions of them, making up new details for old stories, changing the endings, and so on. The most famous version of the story of Jason and Medea is probably the rather harrowing version Euripides told in his tragedy Medea. In that story, Medea is a Thessalian witch who has helped Jason perform his greatest deed, the recovery of the Golden Fleece . They have two sons, Alcimenes and Thessalus. When they come to Corinth, Jason decides for political reasons to abandon Medea and marry Glauce, the daughter of the Corinthian King Creon.

It turns out that dumping your baby mama and your two kids for a new woman is not such a bright idea when your baby mama is the granddaughter of the Sun and a powerful sorceress. Medea wreaks havoc on the characters in the play. She sends Glauce a poisoned dress that causes her to literally catch on fire and burn up both her and Creon. Then she takes revenge on Jason by murdering their two sons and conjuring up a chariot pulled by dragons to fly off in. It’s a shocking conclusion that probably horrified the ancient Greeks even more than it horrifies us.

Medea in her dragon chariot

But as I said, these stories don’t have fixed narratives. In some versions of the story, Jason and Medea have as many as fourteen kids. Many scholars think that the child-killing was invented by Euripides because there’s no evidence for it prior to the late 5thcentury when Euripides wrote his play. In some versions, Medea finds shelter at Thebes after the killings. In another, she goes to Athens, married King Aegeus and then persuades her step-son Thesseus to kill his father. In yet another, she returns to her homeland where she murders her uncle to put her deposed father back on the throne. Still another version has her flying in her chariot to Persia. Even the ancient Greeks found this plethora of versions somewhat bewildering, sort of like Marvel comics fans after three decades of non-stop reboots.

As it happens, in some versions her son Thessalus survives and goes on to become king of Iolcus. It’s this version of the story that writer-director Jan Hendrik Verstraten has used as the foundation for his short film. In this version Thessalus (David Cotter) survived because he realized something was wrong when Medea (Emanuela Ponzano) tried to poison him and poured the drink out when she wasn’t looking. As a result, when Medea fled, she mistakenly thought she had killed him, and she has lived in Thessaly in an underground labyrinth as an oracle. Now he’s a man of about twenty, and he and a friend, Poseidonius (Rhys Howells) have been sent by the king of Iolcus to kill her. The result is a story that doesn’t exactly tell any specific story from Greek myth, but which still manages to be relatively true to the spirit of the material.

The core of the story, obviously, is the confrontation between Medea and Thessalus, who is understandably angry at his mother for trying to poison him. Medea, for her part, is shocked by this ghost from her past that has suddenly reappeared seeking vengeance. But like any oracle worth her salt, she quickly understands that there is something more going on here than just Thessalus intending to kill her. Although I generally include spoilers in my reviews, since this is a small film without wide distribution, I don’t want to give anything away about the plot twist that takes the story in a somewhat different direction than would be expected. 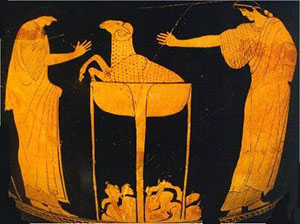 Medea bringing a sheep back to life

Thessalus and Medea is anchored by Ponzano’s performance as Medea. She manages to be regal, witchy, and deeply human all at the same time, and she captures the complex mixture of fury at Jason, guilt over the killing of her two sons, and shock to discover that one of them is still alive. Verstraten, like Euripides before him, is interested in humanizing this demigoddess, but whereas Euripides explored her righteous fury at being abandoned, Verstraten probes the feelings she’s lived with since her murderous rage cooled.

Medea’s labyrinth is actually a Napoleonic-era fort. Its odd angles provide a great set for the characters to operate in, and it’s effectively lit with fire and torches to create a moody, mysterious atmosphere that works well for the story.

Overall, I don’t like Thessalus and Medea as much as I liked I Am Henry. The resolution of the conflict between Thessalus and his mother leaves a little bit too much unspoken, and the film doesn’t explore Medea’s motives enough for my taste. But it’s still a nice effort to explore a forgotten corner of an ancient story.

At the moment, only the film’s trailer is available to the general public because the film is still competing at film festivals. It’s scheduled to become available for on-demand viewing on Vimeo in November. I’ve linked to the trailer below. When the film becomes available, I’ll post my interview with Verstraten.

Thessalus and Medea  is will not be available until November. When it is, I’ll post my interview with Jan Hendrik Verstraten and a link to the film on Vimeo.

Til then, you might consider reading Euripides’ Medea. It’s a challenging play. Medea: Essays on Medea in Myth, Literature, Philosophy and Art offers a good window into understanding the text.