One of the things that people tend to know about the Norse/Vikings is that they used runes for magical purposes. The Last Kingdom employs this trope; Ubba has a sorcerer who uses them. There’s been a lot of misinformation around runes, so now that I’ve gotten through the massive pile of student papers I’ve been struggling with for the past three weeks, I figured I would do a quick post on the issue.

In the show, Ubba has a sorcerer (whose name I wasn’t able to catch, so I’m just going to call him the Sorcerer) who ‘casts runes’. He has a pouch of clay or stone tiles, each of which has a rune on it. He throws them on the ground and looks at them and makes a divination based on what they tell him. I’ve seen similar versions of this scene a number of times in other shows and films.

It’s total bullshit. There is precisely 0 evidence that the Norse ever employed runes in this fashion. As a divination method, it is inspired by the Chinese I Ching and perhaps by western Tarot cards, both of which use randomization as a mechanism for divining, as well as unclear references to Norse divination by lots. But the idea that Norsemen used runes in this particular way doesn’t go back much further than the late 1980s, when some occultists being using them this way. In the 1990s, someone began marketing a commercial set of runes that was sold at bookstores and Renaissance Faires. But rune tiles are completely ahistorical. There’s also no evidence that runes were used on pendants worn around the neck; that’s another contemporary use.

But that doesn’t mean that runes themselves are ahistorical. The Norse did genuinely use them, so we need to look into that a bit more.

Runes emerged in Germanic culture (of which Norse culture was one branch) somewhere in the period between 100-250 AD, as the Germanic peoples had increasing contacts with the Romans. In origin, runic scripts are attempts to replicate the Latin alphabet. Different Germanic peoples developed different runic scripts; we have surviving examples for the Norse, Goths, Anglo-Saxons, Frisians, and Franks. The oldest surviving runic inscription dates to around 300 AD, but it was certainly not the first of its kind. I’m going to focus primarily on Norse runes, just to keep this short.

Unlike the modern alphabet, runes were not designed to be written down, so there is no cursive form of them. Rather they are designed to be carved, originally on wood and later on stone, bone, walrus ivory, and metal. This origin explains several features of runic script. It is made up entirely of straight lines, because those are easier to carve and less likely to disappear into the writing surface; they are carved perpendicular to the grain of the wood, with no horizontal strokes, which would tend to disappear into the grain (and perhaps split the wood, if it was a thin surface).

Additionally, because they have to be carved, they are not used for long texts, such as letters or histories. Instead they tend to be shorter texts, often just a statement of ownership or manufacture, such as ‘Thorstein carved this’. Longer texts exist, but texts of more than 25-30 words are fairly rare.

A third characteristic is that runic script is simple and economical. Most runes are simultaneously individual letters and specific words. For example, in the Norse runic alphabet, the letter T is also the rune for ‘sword’ (as well as the name of the god Tyr), while the rune for K means ‘ulcer’. So an individual rune in an inscription can be either a letter or a whole word. For the sake of brevity, double letters were written as a single rune. The earliest Norse alphabet, called the Futhark (from its first 6 letters) had 24 runes, but shortly before the Viking period started, this was simplified into the Younger Futhark alphabet, which had only 16 runes; the letter K did double duty as the letter G, and some sounds used in Proto-Norse fell out of use in later Old Norse. Runes could also be written in either direction. Since inscriptions often don’t have word separation, accurately interpreting these inscriptions can be challenging.

19th and early 20th century scholars confidently maintained that runic script was a magical language, meaning that its original purpose was magical and that non-magical uses only emerged later on. There were several reasons for this. First the word ‘rune’ means ‘mystery, secret’. Second, a lot of early runic inscriptions seemed to be untranslatable gibberish, which was interpreted as being magical (sort of like ‘abracadabra’). The pagan Norse poem Havamal contains a reference to runes being used to temporarily bring a dead body back to life, and later Norse sagas show runes being used for a variety of magical purposes; for example, Egil’s Saga contains an incident when an improperly written charm makes a man ill, until Egil erases the mistake and re-carves it properly, curing the man. The T rune has been found on several swords; since labeling a sword ‘sword’ seems a bit redundant, it’s been suggested that this was some form of magical charm. Put together, these seemed to point to runes primarily having a magical function. 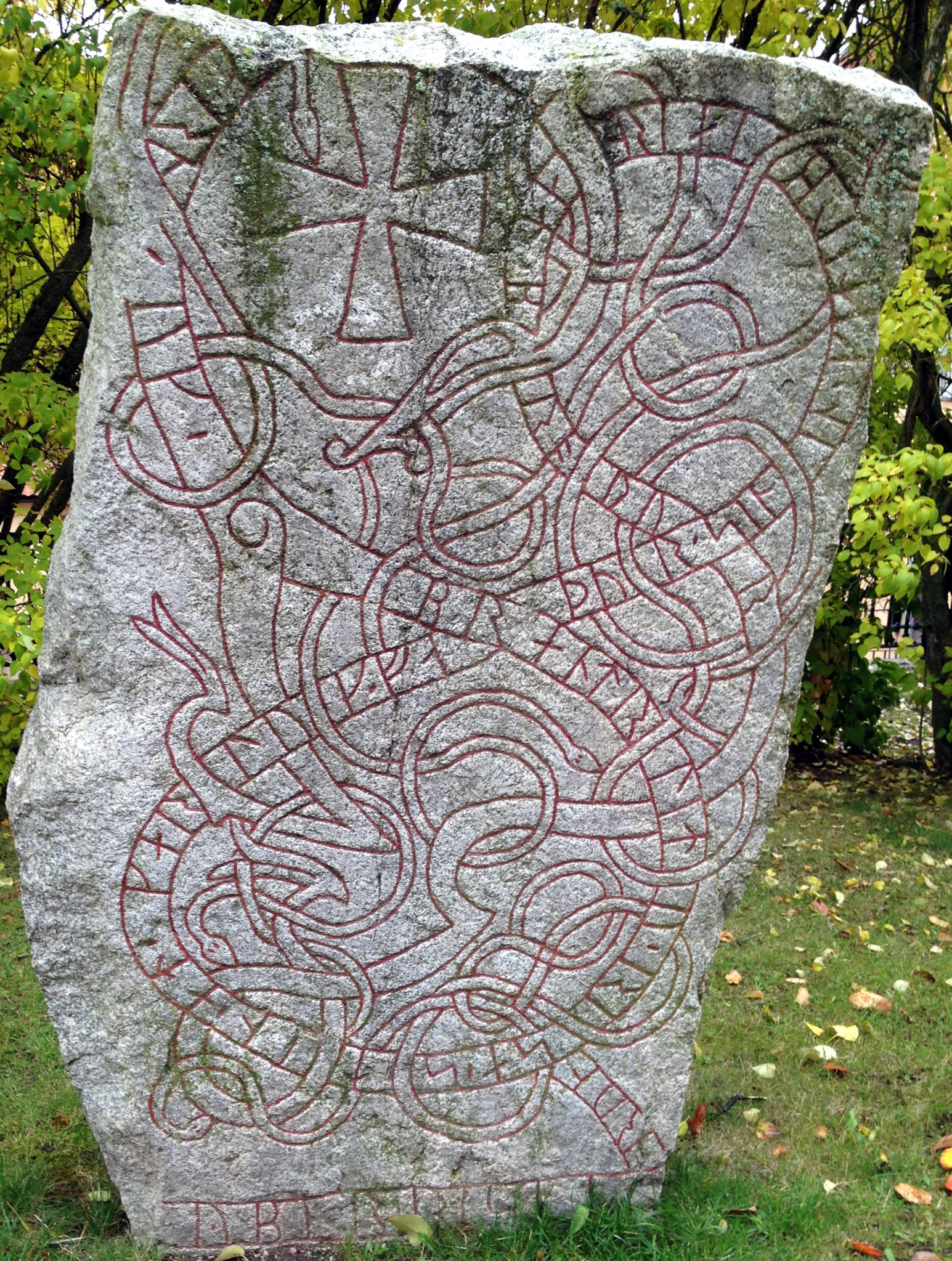 A typical, if elaborate, runestone

But more recently, historians have tended to move away from the ‘magical hypothesis’. It rests on an assumption that early Germanic society was so primitive that it had no practical use for a writing system, so that all writing had to have a magical function. The fact that some inscriptions are unintelligible does not automatically mean that they were magical words; we may simply not know enough vocabulary to translate them. It’s also been pointed out that the inscriptions most likely to survive were high-status inscriptions made on rocks and metal objects, whereas less important inscriptions (like the Norse equivalent of a shopping list) would have been made on more perishable media like wood; it’s likely that we have lost the majority of all runic inscriptions ever made and so our sample is skewed. And Norse sagas were all written centuries after the conversion of the Norse to Christianity. Icelanders clearly thought that their pagan ancestors had used runes for magical purposes, but that doesn’t mean that their ancestors actually had used runes only for that purpose.

None of this means that Norse sorcerers didn’t employ runes for magical purposes. Havamal is good evidence that runes did have a role to play in Norse magic, and the early medieval Sigurdrifumal mentions runes being used to protect against poison in ale, to facilitate child-birth, to protect ships, to improve one’s speaking ability, and as “gladness-runes”, among others. The aforementioned T rune inscribed on a sword is most reasonably explained as a magical charm. What it does mean is that Norse sorcerers wrote their magical texts using the same alphabet they wrote their grocery lists and love letters in. So runes were not inherently magical, but Norse magic probably employed writing on at least some occasions.

Very few surviving examples of runic inscriptions are obviously magical. The Glavendrup Stone in Denmark, like many runestones, is a simple memorial to a dead man by his family. But then it asks Thor to ‘hallow’ the runes. The text ends with a curse against anyone who damages or moves the stone, declaring him to be an outcast. But it’s not clear that the curse has power because it was written in runic script, or simply because the carved declared the curse. For that matter, it’s not clear that the curse is actually supposed to be supernatural rather than social in nature.

A more clearly magical use of runes can be found on the pre-Viking Age Björketorp Stone in Sweden. Its inscription reads “I, master of the runes, conceal here runes of power. Incessantly [plagued by] maleficence, [doomed to] insidious death [is] he who breaks the monument. I prophecy destruction.” What’s not clear is why someone would carve this on a stone. What’s the point of writing “I curse the person who messes with this curse”? Scholars have offered various suggestions about missing gravesites, fertility rituals, and other options, but there’s no clear explanation for the stone yet. But it’s clear that the carver felt that the act of carving the runes was magically powerful in some way, either because the runes made concrete a spoken curse or because the act of carving them was inherently magical.

The Gummarp Stone in Sweden memorializes a man named Hathuwulf, and then repeats the F rune three times. Since the F rune is also the word for wealth, it’s been suggested that this was a magical charm for wealth, but who is supposed to receive this wealth is not clear. So while Norse literature has an idea of runes being used for magic, actually pinpointing examples of runes actually being used that way is harder, and understanding what the point of those examples are is harder still.

A 1st century Roman source, Tacitus’ Germania, claims that the Germanic peoples performed divination with “signs” in groups of three cut from a “nut-bearing tree”. His description doesn’t make it clear how these signs were used for divination. But they are unlikely to be runes, because the runic script hadn’t been invented yet. And this predates the formation of the Norse culture by half a millennium. A highly unreliable 14th century saga claims that the Norse performed divination by means of sacrificial “chips” that were marked with the blood of a sacrifice and then thrown to the ground. But this reference makes no mention of runes. Another Christian source claims that the Norse drew lots for divinatory purposes. That’s the closest we get to a notion of rune tiles being used for divination, but the text makes no mention of runes on these lots. So there’s no actual evidence that runes themselves played a role in divination. That hasn’t stopped 20th century occultists from making up an entire divinatory system from runes. But that’s an artifact of contemporary culture, not medieval Norse culture.

So the next time you see someone “casting runes” in a show or movie, loudly shout ‘bullshit!’ at the screen. If anyone complains, tell them to talk to me.

There are a metric shit-ton of books on Amazon that promise to teach you about runes, but of that shit-ton, approximately one is actually a scholarly book about runes, Sven B.F. Jansson’s Runes in Sweden. It’s a lovely guide to Swedish runestones, with great illustrations. R.I Price’s Runes is a nice little introductory books on the topic, but I couldn’t find it on Amazon, so it may be out of print.

If you want to know more about historical Norse magical practice (as opposed to modern invented practices), one really excellent book is Magic and Witchcraft in Europe, v.3: The Middle Ages, edited by Benkt Ankerloo and Stuart Clark. Only the second section deals with Norse magic, but it’s a very good essay about genuine Norse witchcraft, called seithr. Seithr did not, so far as we know, involve runes at all, so it’s a bit of a tangent from our topic, but a good read nonetheless.

4 thoughts on “The Last Kingdom: Runes”