As I discussed in my previous post, Fall of Eagles deals with major political events from the perspective of the royal families of Austria, Prussia/Germany, and Russia, but doesn’t both to explain the wider political movements that were driving many of the major events. Liberalism is frequently referenced, but never explained, and nationalism isn’t even mentioned as an ideology. The first episode deals with the Revolutions of 1848 on Austria and Hungary while focusing mostly on the limited viewpoint of Empress Elisabeth. The second episode, “The English Princess”, takes the same approach to the unification of Germany in the 1860s.

The main viewpoint character in this episode is Crown Princess Victoria (Gemma Jones), daughter of Queen Victoria and wife of the Prussian Crown Prince Frederick (Denis Lill), son of King William I (Maurice Denham), who is depicted as hesitant, unsure of himself, and prone to fits of tears. Historically. Victoria and Frederick were Liberals, which as I explained in my previous post means they favored a strong Parliament and other representative elements of government, whereas William I and his Chancellor Otto von Bismarck (Curt Jürgens) were Conservatives, so that they favored a strong monarch with few limits on his authority. But the viewer is left to figure this out mostly through William and Bismarck’s preference for an unrestrained military and a willingness to ignore the Prussian Parliament.

The episode focuses on the tensions between William and his son and daughter-in-law. William demands that Frederick express support for press censorship, and when Frederick gives a speech that dodges the issue, William feels betrayed and accuses Frederick of wanting to usurp the throne, and Bismarck counsels William to cut Frederick out of government duties and isolate them. The series frames this as William being unable to conceive of the idea of ‘loyal opposition’, an idea deeply embedded in British politics. Both Victoria and Frederick resent this isolation and their viewpoint is championed in the series with the way the individual scenes frame the situation.

The Unification of Germany

The Revolutions of 1848 demonstrated that there were many Germans who wished to see the unification of the fragmented German nation into a single nation-state. Bismarck, however, wanted to strengthen Prussia and turn it into the greatest European power. While a unified Germany was a way to make Prussia more powerful, there was a serious problem. Austria was a rival of Prussia, and unifying the Germans meant bringing both Austria and Prussia into a new German nation-state, which meant that Prussia would not be able to dominate the new Germany. So Bismarck’s Conservatism was at odds with the goals of German Nationalists. 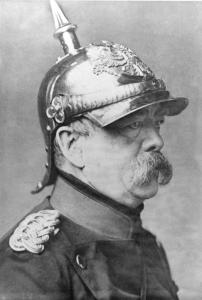 Bismarck’s solution to this problem was to use Nationalism as a way to disguise his ambitions for Prussia. Over the 1860s, he waged three wars: the Second Schleswig War in 1864, the Austro-Prussian War in 1866, and the Franco-Prussian War in 1870. He used the Second Schleswig War as an opportunity to promote himself as the defender of the German Nation from Danish oppression, this winning favor with the German Nationalists. When Austria tried to revise the settlement by appealing to a German Diet, Bismarck accused them of violating the terms of the peace treaty and declared war. In fact, Bismarck’s goal was to force Austria into withdrawing from German politics, and the Prussian military trounced Austria brutally at the Battle of Königgrätz, forcing Austria to sue for peace.

Bismarck watching the battle of Königgrätz

Then Bismarch orchestrated the Franco-Prussian War, editing a telegram from William I to the French ambassador in a way that suggested that William had insulted the French. This tricked Napoleon III into declaring war on Prussia. In the brief war that followed, Prussia again triumphed handily. This gave Bismarck the political capital to press for a German unification that excluded Austria and which allowed Prussia to dictate the terms of the unification. The Nationalists rejoiced to see their goal of German unification advanced so far, while the Liberals looked away from Bismarch’s violent methods and toward the constitution that he offered.

On the surface, the constitution appeared to be a Liberal document, establishing universal manhood suffrage and vesting substantial power in what was essentially a two-house Parliament. The Reichstag (functionally the Lower House) was elected by all male citizens over 25, while the Bundesrat (functionally the Upper House) was appointed by the heads of the individual German states, with Prussia getting as many votes as the next four largest house combined and slightly more than 25% of the total votes. The Bundespräsidium or presidency of the German Confederacy was held by the Prussian king, who received the title of Emperor. But when looks closely at the details of the constitution, it actually grants the king of Prussia enormous power, because the Bundesrat held much more power than the Reichstag, and it was dominated by Prussian appointees, which allowed the king of Prussia to issue orders that the Bundesrat carried out. In practice, this was a Conservative constitution dressed up as a Liberal one, and it vastly increased the power of Prussia by making in the dominant state in Germany.

In the series, William I feels so unable to govern that he attempts to abdicate in favor of his son, but Frederick refuses on the grounds that Hohenzollerns do not abdicate. (Whether this detail is true I am unsure of. I haven’t been able to find any confirmation of it.) Instead, William turns to Bismarck, who takes advantage of the fact that the old man just wants to be told what to do, and sets about engineering the unification of Germany to make himself more powerful. The series makes no mention of the Second Schleswig War, and then focuses on the Austro-Prussian War, which is simply blames on Bismarck’s aggression. There is an extended scene in which Bismarck, having defeated Austria in three battles in as many days now wants to negotiate for peace. William and General von Moltke want to press onward and occupy Vienna, hoping to take Austrian land. Bismarck (backed by Frederick, who dislikes war) says that Austrian land has no value to Prussia. It’s understandable why William and von Moltke can’t understand what Bismarck wants because Bismarck never clearly explains what his purpose for the war is. He gets his way by threatening to quit and then orchestrates the Franco-Prussian War, again failing to explain what his motives are. Somehow, victory over France leads the other German states to press William to become emperor, which he resists but which Frederick presses for.

If one does not know what Bismarck was actually up to, this episode would certainly not enlighten one much about the process of German unification. Bismarck comes off as a steely but emotional man who cares little for human lives other than his soldiers and has little respect for the ruler he serves.

This review was made possible by a reader who made a generous donation to my Paypal account and requested I review this series. If you have something you’d like me to review, make a donation and tell me what you’d like me to watch.

Fall of Eagles is available on Youtube. The series is available through Amazon, but if you decide to buy it, make sure you’re getting a format that will play on your DVD player; some versions only play British and European formats.  For those interested in Bismarck himself, try Jonathan Steinberg’s Bismarck: A Life. If you want to know more about Bismarck’s unification of Germany, take a look at DG Williamson’s Bismarck and German Unification, 1862-1890.

4 thoughts on “Fall of Eagles: The Unification of Germany”