My previous post on The Eagle (2011, dir. Kevin McDonald) took issue with the film’s terrible prologue text. So let’s look at the film itself and see what there is to say about it.

The Eagle’s plot focuses on Marcus Flavius Aquila (Channing Tatum), and for once a Hollywood film gets the Roman names right. His father was the commander of the ill-fated 9th Legion, lost in Scotland a generation before. Initially, he wants to make up his family’s dishonor through military service, but in a battle with the Celts he suffers a leg injury that leads to his honorable discharge. So he decides to travel into Scotland seeking the lost Eagle Standard of the 9th Legion. He is accompanied only by Esca (Jamie Bell), a slave that he rescued from a gladiatorial fight.

Once they are north of Hadrian’s Wall, Marcus becomes heavily dependant on Esca, who can communicate with the Picts when Marcus can’t. Eventually they discover that the Seal People have the Eagle. The Seal People chieftain (Ned Dennehy) welcomes Esca, who claims that Marcus is his slave. Esca figures out where the Eagle is kept and they steal it, but in the process they slay the chieftain and must flee back toward the Wall, pursued by the Prince of the Seal People (Tahar Rahim) and their warriors.

When it looks like the will be overtaken, Esca manages to find the survivors of the 9th Legion, who have been living among the Picts. He persuades them to stand and fight for their lost honor, and this motley army manages to deal with the Prince of the Seal People and the other warriors, thus enabling Marcus and Esca to return the Eagle Standard to the Roman authorities.

The film has a simple plot, and despite the somewhat improbable final battle, the film works as a modest story of a man recovering his family’s honor through a single brave deed. It doesn’t try to be more than it is, and it avoids the grandiosity that so many action films have these days. A particularly effective sub-plot is the relationship between Marcus and Esca, who begin as master and slave, then have that relationship literally inverted, before finally become friends. Esca’s loyalty to the man who saved his life is a familiar film trope, but it works here perhaps because the source material is a Young Adult novel; the earnestness of the moral point feels genuine, and Bell does an excellent job with his character’s evolution. Tatum’s modest acting skills actually work to his advantage here; he conveys the appropriate Roman Stoicism nicely.

What’s North of the Wall?

In the film, the people north of the Wall are referred to in passing as the Picts, but other than that, the film doesn’t identify them, and it’s clear that the Seal People are just one tribe in the region. The Seal People dress differently from the other peoples Marcus and Esca talk to; in particular their warriors coat their bodies with some sort of mud or brownish body paint.

Historically, as I’ve discussed before, the people living in what is today Scotland in the 2nd century were not Picts, but rather Caledonians. The exact relationship between the Caledonians and the later Picts is unclear (since neither was a literate people, and the Romans wrote about them only in passing), but Pictish society may have emerged out of a collapsed Caledonian society. But the term Picti (Latin for ‘painted ones’) only occurs in the later 3rd century. In the 2nd century, soldiers at Hadrian’s Wall used the term Brittunculi (roughly, ‘nasty little Britons’). 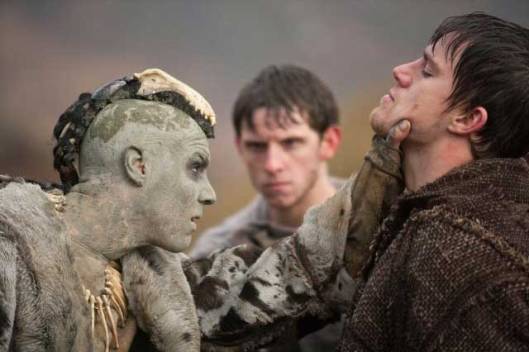 So the film is, like all films about Roman Scotland, simplifying by projecting Pictish society back in time a little bit. But at least these Picts aren’t painting themselves blue the way most cinematic Scottish people do.

Another problem with the film’s depiction of Caledonia/Pictland/Scotland (for convenience, I’ll just call it Scotland) is that once the characters pass Hadrian’s Wall, they are in a sparsely-inhabited wilderness where no one knows Latin at all, thus making Marcus rely on Esca’s knowledge of the Celtic language.

There are a couple issues here. First, the film finesses the language issue a bit. We don’t know what language the Picts spoke. Scholars have debated whether Pictish was a branch of the Celtic language or a totally unrelated indigenous language. Esca is a Brigantes, the Celtic tribe in northern England, so if Pictish was a branch of Gaelic it’s reasonable to assume that he could have muddled his way through simple conversations with people who spoke a related language. But if Pictish was unrelated to Gaelic, it’s less plausible. But the film does a decent job of trying to handle the language issue. The Seal People speak modern Scots and Irish Gaelic, and the film went to the trouble to casting actors who actually know those languages rather than just giving them a dialect coach. 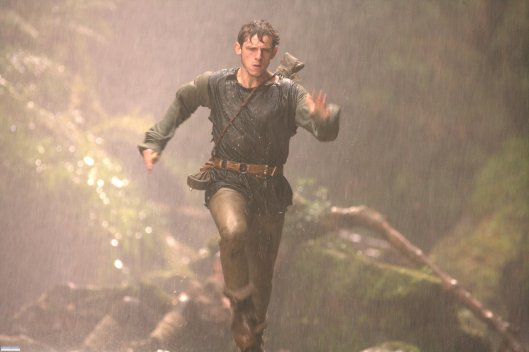 As I’ve mentioned before, skin-tight leather wasn’t a thing back then

Another problem is that the film is set in the 140s, about 20 years after the 9th Legion’s supposed destruction. But in the 140s and 150s, the Romans were attempting the occupation of southern Scotland, so that Hadrian’s Wall would not have been the Roman frontier at all, and it is likely that people north of the Antonine Wall (the new frontier) would have been more familiar with the Romans than this film suggests. And Scotland wouldn’t have been desolate and unoccupied as the film suggests.

But we can probably forgive these mistakes. Explaining that Britain had two Roman frontier walls would have been more complicated than it was worth. The film never directly explains the geography. It’s unclear just how far north Marcus and Esca go before they find the Seal People, although the geography suggests northern Scotland (and in fact the film used a location in northwestern Scotland for the Seal People village).

If you analyze it too closely, the geography doesn’t really work. The 9th Legion marched into Scotland and got wiped out in an ambush by the tribes in the region. This seems likely to have happened somewhere in southern Scotland—how could they have marched all the way north without encountering resistance and only then get ambushed? But if they were ambushed in southern Scotland, why were the Seal People involved? The surviving Romans appear to be living 1-2 days south of where the Seal People live, suggesting that Marcus and Esca traveled the length of Scotland and barely ran into anyone on the way, but if Scotland is that depopulated, it seems unlikely that there were enough Picts to annihilate a whole legion of about 5,000 men. But that’s a small quibble. The film is compressing geography for the sake of story, and that’s entirely reasonable.

One very nice touch is that the film gets the difference between Roman and Celtic fighting systems correct in the two battle scenes it shows. The Romans are heavily armored and employ complex tactics like the testudo, whereas the Celts are essentially naked and rely on swarming the enemy and using raw fury to overpower their opponents. This explains why a small Roman force is able to prevail over a much larger group of enemies. Unlike in most historical action films, armor actually has protective value and brute force doesn’t win the day.

In my next post, I’m excited to be able to offer an interview with Lindsay Allason-Jones, the historical consultant on the film!

The Eagle  is available on Amazon. Sutcliff’s original novel (and its two sequels) is too.

If you’re interested in Roman-era Scotland, there are not a lot of books on the topic, but David Breeze has written a number of works on the subject, including the appropriately-titled Roman Scotland and The Antonine Wall. There’s David Shotter’s The Roman Frontier in Britain: Hadrian’s Wall, the Antonine Wall and Roman Policy in Scotland

23 thoughts on “The Eagle: Roman Scotland”