Fox’s Gotham doesn’t have a lot to do with history, but there is one small detail that catches my eye every episode, so I figured I’d explain it, because I’m guessing it slips by most viewers.

In Bruce Wayne’s study (the main set for Wayne manor), this painting hangs prominently on the wall. 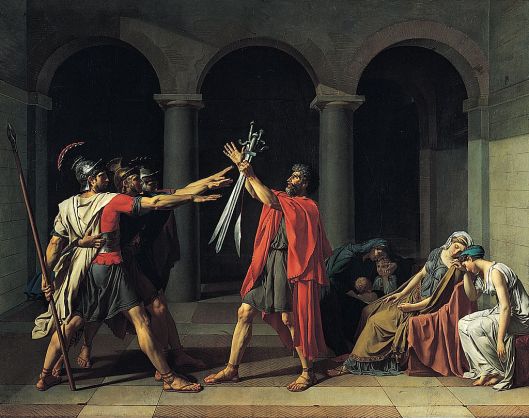 It’s The Oath of the Horatii by Jacques-Louis David, painted in 1784. It currently hangs in the Louvre.

David painted it in the 1780s, half a decade before the outbreak of the French Revolution. The original idea for the painting was to have it emphasize the principle of loyalty to the state and therefore to the monarchy. But the work that David actually produced was much more politically revolutionary.

The scene that it illustrates is from early Roman history, as recorded by the Roman historian Livy. According to Livy, during the Monarchy, the Romans got into a war with the Sabines. Rather than have the two armies fight each other, each side chose three warriors to fight the battle for them, with the winning side being the one whose warriors eliminated the other side. The Romans chose triplet brothers from the Horatian clan as their representatives, while the Sabines selected triplets from the Curiatian clan for theirs. In the fight, the Curiatii slew two of the three Horatii, but the third, Publius, managed to kill all three of the Curiatii single-handedly, thus winning the battle for the Romans.

David’s painting depicts the three Horatii brothers swearing an oath to their father that they would sacrifice their lives for the good of Rome. By removing the Roman king from the scene and making the elder Horatius the recipient of the oath, David made the painting about the need for self-sacrifice for the good of the community. It was one of many stories Livy tells that emphasize the idea that a good Roman puts the needs of the community ahead of the needs of the individual.

The choice of this painting in the show is a subtle way of foreshadowing young Bruce’s decision to put Gotham’s need for a crime-fighter above his own personal happiness and to devote himself to his life as Batman. And the elder Horatius naturally acts as a stand-in for Bruce’s death father Thomas. It’s a sly touch that makes its point without being heavy-handed.