In my previous post, I summarized a lot of 17th century Dutch history so I could make a post about The Admiral (aka Michiel de Ruyter, 2015, dir. Roel Reiné, Dutch with English subtitles). The film in question follows the career of Michiel de Ruyter (Frank Lammers) both as a naval commander and as a figure in 17th century Dutch politics. Because de Ruyter’s career is to some extent tied to the political career of Grand Pensioner Johan de Witt (Barry Atsma), the film also looks at him a good deal. 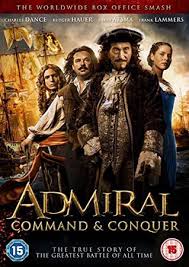 The film, which opens in 1653 with the Battle of Scheveningen during the First Anglo-Dutch War, gets the basic Dutch political tensions correct. De Witt and therefore de Ruyter are correctly shown as representing the Republican position and therefore being in conflict with the Orangists. It’s clear that the Orangists want Prince William (Egbert-Jan Weber) to have more power in government, but the film never really gets at what is at stake for these two factions beyond which group will run the country. The film makes only the briefest allusion to the conflict between the strict Calvinist and tolerant Calvinists when de Witt says during a speech that his country is free because every many is free to decide how they will worship God. This is, in fact, a loosely correct expression of de Witt’s actual position, and it’s nice to see a historical film that actually explains what it means by ‘freedom’ (cough Braveheart 300 cough).

It likewise gets the basic facts about the Dutch conflicts with England correct. It makes it clear that commercial rivalry played a significant role in these wars, although it doesn’t connect de Witt’s party to the wealthy merchants who stood to benefit the most from long-range trade. Perhaps because de Witt is allied to de Ruyter, the focus of the film, de Witt’s motives are presented as being entirely good and without self-interest while the English and the Orangists other than Prince William himself as shown to be more self-serving and malicious. Charles II (a well-cast Charles Dance) at one point tried to bribe William by offering to make him king of the Netherlands, an offer William indignantly rejects.

Ever wonder what Ron Jeremy would look like if he were a 17th century Dutch admiral? Wonder no more

The film is particularly proud of the Netherlands’ Republican history. It opens with the false claim that the Netherlands is the “only republic in the world”. This ignores the fact that Venice was also a republic throughout the 17th century (and had been for centuries), and that in 1653, England was a republic as well. Given that Charles II is a key villain in the story, the film-makers probably decided to ignore the story of England’s unsuccessful experiment with republicanism simply because explaining why England is a republic at the start of the film but a monarchy a few years later would be a distraction from the main story.

Not only does William refuse to subvert the Republic, de Witt orders the execution of an Orangist who was plotting with Charles. This is a reference to Johan Kievit, but in the film it’s not Kievit who does the plotting, because Kievit (Derek de Lint) is, along with Charles, the master villain of the piece. Throughout the film, Kievit malevolently scowls at de Witt, plots to remove him in favor of Prince William, supports Tromp against de Ruyter, and orchestrates the murder of the de Witt brothers. His motives are never explained beyond general villainousness. 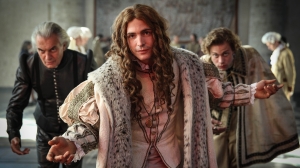 The film also plays fast and loose with chronology. Although Prince William was only 3 years old in 1653, he’s an adult in the film. The film covers 23 years of actual history, but no one ages. De Ruyter’s children are still children at the end of the film. The film repeatedly compresses events, giving the sense that the First Anglo-Dutch War, the Second Anglo-Dutch War and the Third Anglo-Dutch War all took place over the course of perhaps a year, instead of the 20 years they actually took. Charles II signs of the Peace of Breda (1667) and then immediately schemes with Louis XIV to invade the Netherlands, even though that happened in 1672. This makes no sense at all, since he signs the Peace of Breda because he’s lost his whole fleet and therefore cannot continue fighting.

One of the better elements of the film is that it works hard to make naval combat intelligible. It shows a half-dozen battles, and frequently cuts to a bird’s eye view so the viewer can get a sense of how the ships are maneuvering. It spends a great deal of time on the Four Days’ Battle, showing crewmen doing a wide range of jobs and demonstrating just how terrible a problem wooden shrapnel was in naval combat. If you’re looking for a movie about wooden ships and what it takes to run them, you’ll like this movie.

Unfortunately, it also takes substantial liberties with the facts of the battles. For example, the film collapses the Four Day’s Battle and the St. James’ Day Battle into one event, moving Tromp’s decision to break the line and pursue the English from the latter battle to the former and making that decision the reason that de Ruyter lost the Four Days’ Battle, when in fact the Dutch more or less won that. In the film’s version of the Battle of Texel, de Ruyter orders Tromp to break the line, thus tricking the English into sailing too close to the Dutch coast, which causes the ships to haul over to one side, leaving them vulnerable to Dutch cannon fire and giving the Dutch a decisive victory that forced the English out of the war. That bears little resemblance to the actual Battle of Texel, which was more like a stand-off. The Raid on the Medway involved several days of cannon fire and a large group of marines, not a midnight sneak up the river with a handful of men.

So from a historical standpoint, the film is something of a mixed bag. It gets the big picture broadly correct, but fudges a lot of the details in the name of a simpler narrative. It also smacks a bit of Braveheart-style nationalistic chest-thumping, but without the histrionic speeches. However the topic is refreshing. How many movies about 17th century naval warfare have you seen?

The Admiral is available on Amazon.

I couldn’t find anything on Michiel de Ruyter, but if you want to know more about Johan de Witt (who was an important philosopher and mathematician as well as politician), take a look at Johan de Witt: Philosopher of ‘True Freedom’

6 thoughts on “The Admiral: Lots of Naval Battles”