If there’s one genre that’s absolutely been done to death, it’s the 17th Century Dutch Naval War genre. But I hope you can handle another entry into that storied category, in the form of The Admiral (aka Michiel de Ruyter, 2015, dir. Roel Reiné, Dutch with English subtitles).

The film looks at Dutch politics and conflicts with England in the mid-17th century by focusing on the life of Michiel de Ruyter, one of the Netherlands’ greatest naval leaders. In the 17th century the Dutch were one of the great naval and commercial powers of Europe, because their wide maritime commerce network made them far wealthier and more powerful than their small size would suggest. This tended to bring them into conflict another of the major naval and commercial powers of the era, Great Britain.

17th century Dutch politics revolved around the nature of their state. In 1588, after the Dutch rebelled against Spanish rule and started the Eighty Years’ War, they declared themselves a republic. Their rebellion was couched in terms of defending their medieval rights, so they needed to adapt medieval political concepts to their new situation. Each of the seven rebellious provinces was given the right to elect a Stadhouder, or Steward, to administer it, and over the course of the next half-century, there was a tendency for one man to receive the stadhouder-ship of several provinces. In the 1640s, William II of Orange was stadhouder for five of the seven provinces. In 1648, the Dutch secured a final peace with Spain that acknowledged Dutch independence, but afterward William alienated many Catholics in the country by trying to impose the strict Dutch Calvinist Church on them and by refusing to disband the large army he had maintained.

The Netherlands in the 17th Century

When William died suddenly in 1650, leaving only a posthumous son, Prince William, five provinces declined to elect the infant William as the new stadhouder and let the office fall vacant. Instead, the Grand Assembly (essentially, a Dutch Parliament) turned for leadership to the Grand Pensionary of Holland, who was technically only an administrator for the province of Holland, but in the absence of a new stadhouder, he came to function as a sort of Prime Minister for the Republic. In 1653 the office was given to Johan de Witt.

De Witt emerged as the leader of the wealthy mercantile faction in Dutch politics, who favored aggressive protection of Dutch commercial interests overseas, as well as moderate Calvinism and toleration. The opposing faction were the Orangists, mostly less wealthy businessmen who worried about the political dominance of the wealthy merchants and who therefore favored the rights of the House of Orange as a counterbalance. This faction wanted to see William III appointed as stadhouder and wanted a most strict adherence to Calvinism.

When De Witt signed a peace treaty with England in 1654 to end the First Anglo-Dutch War, there was a secret rider forbidding William III to ever be appointed as stadhouder, because England’s leader, Oliver Cromwell, worried that, since William was the grandson of the recently-executed English king Charles I, the Orangists might support a return to English monarchy. And since both countries were republics at the time, it seemed reasonable to expect that they would remain at peace and perhaps even develop an alliance.

Unfortunately for that, in 1660, the English ended their experiment with republicanism and restored their monarchy, bringing Charles II, the uncle of Prince William, to the throne. In 1665, tensions over trade resulted in the Second Anglo-Dutch War. The English fought a massive battle with the Dutch at Lowestoft; more than 100 ships were involved on each side. After the Dutch flagship exploded, killing Admiral Van Obdam, the Dutch position collapsed and the English routed them in the worst naval defeat in Dutch history.

De Witt salvaged a desperately bad situation by appointed the commoner Michiel de Ruyter as admiral, much to the irritation of the Orangists, who wanted Cornelis Tromp, the son of a previous admiral. De Ruyter proved a brilliant naval leader. De Witt also dedicated an enormous amount of money to rebuild the Dutch navy. In 1666, the Dutch navy fought the English in the Four Days’ Battle, one of the longest naval engagements in history. De Ruyter inflicted so much damage on the English fleet that they eventually had to retreat, but de Ruyter lacked the gunpowder to pursue them.

A few months later, the St James’ Day Battle went against the Dutch. De Ruyter made a tactical error and found his portion of the fleet becalmed and unable to prevent the English from destroying a large section of the fleet. Tromp, commanding the Dutch rear, avoided de Ruyter’s mistake, broke line, and destroyed the English rear, pursuing it through the night, in the process losing all sight of the Dutch fleet and nearly being captured the next morning. Only the Great Fire of London prevented Charles II from following up on the victory.

After the battle, de Ruyter blamed Tromp for the defeat, faulting him for breaking from the line to pursue the English ships. The Netherlands split over the issue. Tromp allowed his brother-in-law, Johan Kievit, to publish his version of events. It was soon discovered that Kievit was plotting with Charles II to put Prince William into power; he fled the country and was sentenced to death in absentia. A Tromp supporter attempted to assassinate de Ruyter but failed.

De Ruyter brought the Second Anglo-Dutch War to an end in 1667 by launching an audacious raid on the English shipyard at Chatham on the Medway river, where the English fleet was laid up for repairs. De Ruyter and Cornelis de Witt, Johan’s brother, fought their way past several English fortifications, broke a chain across the river, destroyed 13 ships and stole the English flagship, the Royal Charles. Lacking any heavy ships, Charles had no choice but to sign the Treaty of Breda.

De Witt used this triumph to abolish the stadhouder-ship for Holland and get William declared ineligible for the office in three other provinces by instead giving him a key military office. This provoked growing Orangist outrage. In 1672, when the English and French attacked the Netherlands in what the Dutch called the Disaster Year, de Witt narrowly escaped assassination, and found it prudent to resign as Grand Pensionary, William was made stadhouder of the Netherlands soon thereafter as William III.

But this did not satisfy the Orangists. Cornelis de Witt was arrested on charges of treason, tortured, and sentenced to exile. When Johan went to the prison to bid his brother farewell, the civic militia in the Hague attacked the two men in what most scholars think was an orchestrated riot. They were shot, stripped naked, and hung up in a public square; the Orangist mob literally roasted their livers and ate them. Responsibility for the killings has never been pinned on anyone, but William III had acted to order the withdrawal of a Dutch cavalry regiment from the area just hours before, leading many to suspect that he may have known about the plot. Tromp and Kievit were certainly involved, and William later on promoted both men, including arranging for his uncle to give Tromp a baronetcy. 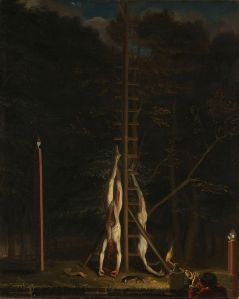 In 1673, the English attempted to launch of the Netherlands, but de Ruyter and Tromp fought the English to a stalemate, inflicting enough casualties that the English were ultimately forced to sue for peace after the Spanish agreed to join the war. In 1676 de Ruyter took a Dutch fleet into the Mediterranean where he fought an encounter with the French at Stromboli. It was an inconclusive battle, but de Ruyter lost a leg to a cannon ball and died, leaving the admiralty to Tromp.

In 1688, three years after the death of Charles II, William III led a revolt against Charles’ brother James II. Crossing over to England with a small force after the English Parliament appealed to him for assistance against the openly Catholic James, William forced James to flee the country, even though he was married to James’ daughter Mary. Parliament declared that William and Mary were the new monarchs. William didn’t even have to change his numbering, since he was the third William on the English throne.

Now that I’ve summarized what actually happened, in my next post, I’ll talk about The Admiral.

The Admiral is available on Amazon.

I couldn’t find anything on Michiel de Ruyter, but if you want to know more about Johan de Witt (who was an important philosopher and mathematician as well as politician), take a look at Johan de Witt: Philosopher of ‘True Freedom’

11 thoughts on “The Admiral: More about Dutch History Than You Ever Wanted to Know”