After a lot of exam grading and brief digression for Westworld, it’s time to get back to the Russell Crowe Robin Hood (2010, dir. Ridley Scott). The film culminates in a battle on the beach somewhere along the southeast coast of English. The evil French are launching an invasion, and it’s up to Robin Hood to help King John stop them. 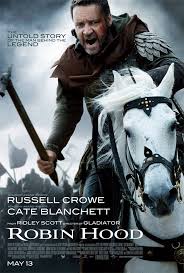 There is so much wrongness here it’s hard to know where to begin. So let me just count the problems.

Basically, there’s no way this battle ever happened anywhere in the Middle Ages.

This review was made possible by a generous donation from Lyn R. If you want me to review a specific film, please donate $10 or more and tell me what movie you’d like me to review, and I’ll do my best to track it down and review it, as long as I think it’s appropriate.

Robin Hood  is available on Amazon.

12 thoughts on “Robin Hood: The Battle on the Beach”