In most Robin Hood movies, John is a bad guy because he’s A) hoping to usurp the throne from his older brother King Richard and B) collecting taxes, which is always an evil thing to do in movies. But Robin Hood (2010, dir. Ridley Scott) takes a totally different approach. The first part of the movie deals with the totally legitimate transfer of the crown from the now-dead Richard to John (Oscar Isaac). John isn’t trying to usurp anything—he’s the lawful king. And while John wants taxes, his attempts to collect the taxes aren’t really the problem. The problem is that the villainous Sir Godfrey (Mark Strong) is abusing the authority John gave him because he wants to stir up a rebellion against John. So the film abandons the standard-issue Bad King stuff that Johns in these movies do. As a result, it has to find other ways to make John a Bad King, as Sellars and Yeatman would put it. 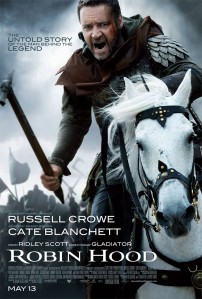 At the start of the film, John’s being a dick. His mother Eleanor discovers his wife Isabel of Gloucester standing outside his bedroom. She’s locked out because John is cavorting inside with Isabella of Angouleme (Léa Seydoux), the niece of his rival King Philip of France. He decides to divorce Isabel so he can marry Isabella. And in fact John did ditch Isabel just after his accession to the throne in favor of Isabella. This plotline, if we want to grace it with such a term, doesn’t go anywhere. It’s just there to signal that John’s a Douchebag with a Crown, even before he has the crown part. 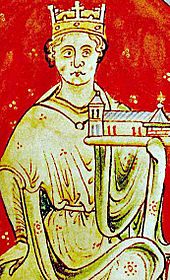 Then he starts getting demanding about tax money, and sends Godfrey off to collect some. But the film gets John’s financial situation all wrong. In the film, he just seems to want lots of money because the government is expensive to run. The reality is a lot messier. John’s financial problem most stemmed from the loss of Normandy to Philip in 1204. He spent the rest of his reign trying to raise the money to finance efforts to recover Normandy. So John was, in fact, trying to recover part of his rightful inheritance that had been confiscated from him.

John’s strategy for raising money had comparatively little to do with taxation, and everything to do with what historians term ‘feudal dues’. As King of England, John was the feudal lord of the English nobility; they held land from him as fiefs, and that gave them obligations to him. These obligations were widely acknowledged, but not really codified. Among the rights that it was universally acknowledged a king had over his vassals were

The right to control the remarriage of a vassal’s widow, or alternately the right to charge her a fee to be free from that control

The right to take a vassal’s orphaned minor heirs into wardship, which allowed him to draw revenues from their fiefs until they were adults

The right to arrange marriages from heirs in wardship

It needs to be emphasized that these practices were entirely traditional, and in England dated back to the Norman Conquest in the mid-11th century. John’s father and brother had regularly demanded these dues from their vassals, and when John demanded them he had as much right to do so as his predecessors.

Only a douchebag sits on a throne like that

What John was doing that was problematic was finding ways to use these rights as money-raising devices to help fund a campaign in France. John took advantage of the fact that these dues were only vaguely regulated. It was unclear just how much of a relief a lord could demand from a vassal’s heir, for example, so John charged aggressive reliefs. He ordered his officials to aggressively exploit the fiefs he controlled through wardship, draining money out of them and failing to maintain the properties adequately. He essentially auctioned off the marriages of heiresses and widows, often marrying below their social station (called disparagement). He declared military campaigns, levied scutage, and then cancelled the campaign. These actions were not illegal, but they were distasteful to many of the nobles.

John’s father Henry II had built up royal authority in part by creating a centralized legal system in which plaintiffs paid the crown money to initiate various legal proceedings in royal court. John found various ways to manipulate the legal system to his benefit. Since it was his court, there was nothing illegal about, for example, imposing heaving fines for small offenses, or re-trying a defendant who had been acquitted, or ordering someone imprisoned without a trial. These were all tools that John used to coerce money or obedience out of various subjects.

What offended John’s nobles was not that he was doing these things per se, but rather that he was doing them more than they considered appropriate, and that he was doing these things against them. After nearly a decade of these practices, John’s barons rebelled and seized London. John, working through Archbishop Stephen Langton, negotiated the Magna Carta, an agreement in which John ‘voluntarily’ promised to abide by various enumerated limits. For example, the Magna Carta specifies the amount of money that can be demanded as a relief. It forbids mandatory scutage, the disparagement of widows, and so on. It establishes rules of due process in the legal system and forbids double jeopardy. And it established that if John wished to impose other financial devices, he would have to get the permission of the men who were going to be paying. In other words, if John wanted to impose taxes distinct from the feudal dues, he had to get permission from the tax-payers first. John hadn’t been collecting taxes at all; he was collecting feudal dues and legal fines. But Robin Hood movies translate the issue to modern audiences as taxes because that’s an issue we can understand.

One of four surviving copies of the Magna Carta

In Ridley Scott’s movie, however, the Magna Carta predates John. It was written by Robin’s stonemason father about 25-30 years earlier, during the reign of Henry II. It wasn’t a practical result of negotiations; it was some sort of political manifesto that articulated Enlightenment ideas about ‘freedom’ and human equality 600 years early. It wasn’t a disagreement about the exploitation of feudal rights; it was an attack on royal authority, viewed as tyranny. Needless to say, this is total Hollywood gibberish. Treating the Magna Carta as a sweeping statement of political rights makes no sense whatsoever and situating it in the reign of Henry II rather than late in John’s reign renders it so devoid of context as to be essentially meaningless.

But the movie does get one thing right. John repudiated Magna Carta the moment he thought he could get away with it, and it remained a dead issue until his infant son Henry III inherited the throne the next year. At his coronation, the infant Henry’s representative swore to adhere to the Magna Carta, thus reviving the arrangement. Subsequent monarchs swore to maintain it, thus embedding it in English legal tradition.

This review was made possible by a generous donation from Lyn R. If you want me to review a specific film, please donate and tell me what movie you’d like me to review, and I’ll do my best to track it down and review it, as long as I think it’s appropriate.

Robin Hood  is available on Amazon.

Dan Carpenter’s Magna Carta is a good introduction to the document and its interpretation.