Alan Rickman died too soon. My first memory of him was his appearance as the criminal leader in Die Hard, but I think he really captured my heart as the manic Sheriff of Nottingham in Robin Hood, Prince of Thieves; he was pretty much the only good thing in that film. And of course, he found a legion of new fans in what is probably now his most famous role, Severus Snape in the Harry Potter films. A Little Chaos (2014) was both his last film role released while he was alive and his second and final film as a director. It’s a modest little film, but not without its charms. 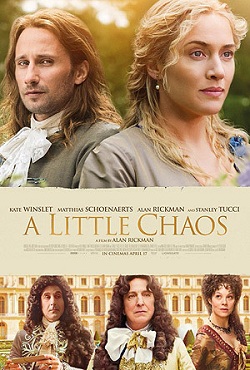 The film tells the story of the construction of the Bosquet de la Salle-de-Bal at the Palace of Versailles, during the reign of Louis XIV. Louis’s landscaper was André Le Notre, one of the greatest landscapers of the 18th century. One of the more unusual things he installed at Versailles was a small outdoor ballroom set in a grotto decorated by seashells and fountains.

The film’s central conceit is that Le Notre (Matthias Schoenaerts) had enough work to do that he fielded out the construction of the grotto to a female landscaper named Sabine de Barra (Kate Winslet), who struggles to win the respect of Louis (Rickman) and deal with the jealousy of Madame Le Notre (Helen McCrory), while coming to terms with the death of her husband and daughter in a coach accident a few years earlier. Louis is himself grieving the death of his first wife, Maria Theresa, and when Sabine accidentally mistakes him for a gardener, the two strike up a cautious friendship based in their mutual sense of grief.

The film has a nice set of linked metaphors in the relationship between gardening, politics, and the realities of life. 18th century landscaping sought to impose a strict sense of order onto nature, the same way that Louis wishes to impose his will on France and the way that Sabine needs to impose constraints to her grief. And yet, as Sabine acknowledges, life always means a little chaos, so she tries to introduce the unexpected into her landscapes (in this case, the unusual grotto), while the unexpected forces of both death and romance disrupt the lives of most of the main characters. In the most touching scene, Sabine finds herself a fish out of water in Louis’ court, and yet suddenly discovers a great deal in common with the other ladies of the court, most of whom have their own dead husbands or children to grieve. It’s a nice reminder of just how high the mortality rate of the pre-modern world was. 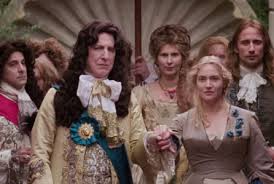 Rickman and Winslet as Louis and Sabine

Rather refreshingly, the film acknowledges right at the start that the whole story is fictional. It’s prologue text reads simply “There is an outdoor ballroom in the gardens of Versailles. In what follows, that much at least is true.” Sabine is a completely fictitious character. The idea that 17th century society would have had room for a female landscaper who essentially ran her own business is a pretty fantasy, but nothing more.

The film has a good deal in common with 2000’s Vatel. Both the brilliant cook Vatel and the innovative landscape Le Notre were historical figures in service to the powerful men of the Ancien Regime, and both films dwell on the complex entertainments and artificiality of court life. Both include Louis XIV, his homosexual brother (a sadly wasted Stanley Tucci), and the Marquis de Lauzun as characters, and both address the problems of being Louis XIV’s mistress (Anne de Montausier in Vatel and Madame de Montespan in this film). So if you’re interested in the court of the Sun King, these two films make an interesting pair.

That said, A Little Chaos is not a great film. There are quite a number of characters who go nowhere. The performances are better than the script deserves, and the film’s feminist ambitions are undermined by a plot that makes men the solution to Sabine’s problems. Winslet and Schoenaets lack the chemistry to make their romance interesting. If you like historical gardening the film gets some bonus points, but it doesn’t live up to its promise to explore the philosophy of landscape design. And the soundtrack frequently becomes intrusive. But it’s worth a watch, particularly if you’re a fan of Rickman or Winslet. The final scene, in which Louis stands serenely in the center of the outdoor ballroom as his court dances around him seems a fitting way to bring down the curtain on Rickman’s career, even if that curtain came down too soon.

A Little Chaos is available on Amazon.

If you want to know more about Louis XIV,  there are a lot of biographies, such as Richard Wilkinson’s Louis XIV (Routledge Historical Biographies). This is a little off-topic, but one of my favorite books about Loui’s court, Strange Revelations: Magic, Poison, and Sacrilege in Louis XIV’s France (Magic in History)

deals with the occult demimonde of 17th century Paris; it goes into considerable detail about the complex social and sexual hierarchies at court.

1 thought on “A Little Chaos: Historical Landscaping in the Ancien Regime”