Day of the Siege: September Eleven, 1683 (aka September Eleven, 1683, 2012, dir. Renzo Martinelli) is a joint Italian-Polish film about the Ottoman siege of Vienna in 1683. It’s notable chiefly for not being especially good or bad, and tackling an important but poorly-known historical event. It reminded me a lot of eggplant; after I was done, I thought, “I could have had something else.” So let’s (reluctantly) dig in. 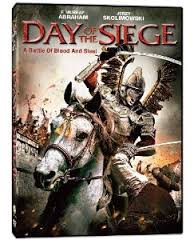 The Battle of Vienna

The Ottoman Empire conquered the last remnants of the Byzantine Empire in 1453 and by the early 16th century the attention of the Ottoman Sultans had turned to expanding up into the Balkans. In 1529, the forces of Suleiman the Magnificent laid siege to Vienna, but was unable to take the city, and heavy snowfall turned the Ottoman withdrawal into a serious disaster. This failure brought an end to Ottoman expansion into Europe for 150 years.

In the middle of the 18th century, the reign of Sultan Mehmet IV (1642-93) marked a significant turning point in Ottoman fortunes. He surrendered a great deal of his political power to his Grand Viziers, inaugurating a gradual decline in the power of the sultan. Initially, the Grand Vizier Köprülü Mehmed proved a successful military leader, defeating Venice, re-affirming Ottoman power over Transylvania after a brief war with Austria, and waging a successful campaign against Poland.

But a later Grand Vizier, Kara Mustafa, proved less effective in the office. In 1681, Hungarian Protestants rebelled against the Austrian Emperor Leopold I’s efforts to impose Catholicism throughout Hungary, and Mustafa decided to support the rebellion in the hopes of being able to break Hungary away from Austria and eventually absorb it into the Ottoman state. He was able to persuade Mehmed IV’s Divan (essentially, the Ottoman Cabinet) to authorize military action, and in August of 1682, the Ottomans declared war on Austria. 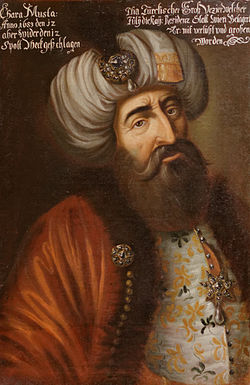 But the timing of this declaration of war was remarkably bad. It was impossible to get Ottoman troops into Austrian territory before the onset of winter, and the result was that Leopold had the entire winter to prepare for war. He concluded alliances with Venice and Poland and was able to call upon some of the major nobles of the Holy Roman Empire to provide troops.

In Spring of 1683, Mustafa marched about 150,000 troops into Austria, accompanied by a force of 40,000 Crimean Tatars. Leopold retreated to Passau, leaving a garrison of 15,000 in Vienna under Count Ernst Rüdiger von Starhemberg. When the Ottoman forces arrived at Pechtoldsdorf south of Vienna, Mustafa persuaded the town to peacefully surrender, but then massacred the population. This action persuaded von Starhemberg that he had to hold Vienna at all costs, because any surrender would result in another massacre.

Note how close to Ottoman territory Vienna is

The siege began on July 17th, and the Turks succeeded in completely cutting off Vienna, so that the food supply quickly became a problem. But the Austrians had nearly three times as much artillery as the Turks, making it hard for the Turks to launch an effective attack on the city. The Turks attempted to sap the walls, but the Austrians detected the Turkish mines and were able to intercept and destroy them. Von Starhemberg was severely wounded, but was able to maintain effective control of his forces, ordering that any soldier found asleep should be shot.

Then a joint German-Polish army of 80,000 troops arrived. There had been considerable quarrelling about how the troops would be paid and who would lead them, but eventually it was agreed that King Jan Sobieski of Poland would be the lead general.

Aware of the arriving relief army, Mustafa ordered an assault of the city very early on September 12th (while it was still dark, actually). But the Imperial forces intervened, forcing a land battle. After half a day of fighting, Sobieski achieved a notable tactical success. Noticing that the Turks had not fortified one side of their position because of the presence of the Kahlenberg mountain, Sobieski managed to get 18,000 cavalry and a number of cannons up the opposite side of the Kahlenberg. In the mid-afternoon he led what has been called the largest cavalry charge in European history down the forested side of the Kahlenberg and into the exhausted Ottoman ranks, which promptly fled. Overall, between the siege and the battle, the Turks lost at least 30,000 men and an enormous amount of loot. Completely disgraced, the unfortunate Kara Mustafa was strangled in Belgrade on the sultan’s orders late in the same year.

The failure of the siege of Vienna was only the start of the Great Turkish War, which lasted down to 1699 and resulted in the significant loss of Turkish territory in what is now Hungary, Croatia, Bosnia and Herzegovina. This marked the beginning of the contraction of the Ottoman state in Europe, a process that would slowly continue for the next century, pick up steam in the 19th century, and culminate in the break-up of the Empire after World War I.

Polish Winged Hussars at the Battle of Vienna

The Day of the Siege

The film tells the story of the battle of Vienna by focusing on two main characters, Kara Mustafa (Enrico Lo Verso) and the Capuchin friar Marco d’Aviano (F. Murray Abraham). Mustafa’s story revolves around a recurrent dream that his wife/concubine has that Mustafa will be killed with a hail of arrows. He consults a blind holy man who tells him that there is some truth in the dream and that while much blood will be shed, Mustafa’s blood will not. Are you noticing the subtle hint that his arrogance will get him strangled?

But the film is more interested in d’Aviano, who is a real historical figure. He was a fairly ordinary friar until 1676, when he apparently healed a nun who had been bedridden for more than a decade. As a result of his he acquired the reputation of a miracle-worker, and people began to seek him out for his blessing. Among those who sought his help was Leopold I, whose wife had been unable to conceive a male heir. D’Aviano became Leopold’s spiritual counselor and remained in close contact with him for the rest of D’Aviano’s life. Leopold was by nature a somewhat indecisive man, and d’Aviano’s more forceful personality helped Leopold make many decisions.

The film shows d’Aviano realizing in 1682 that the Turks are planning to attack. Historically, this is probably because d’Aviano learned of the Turkish declaration of war, which was made in August of 1682. But in the film, the Turks don’t declare war until March of 1683, which has the effect of making d’Aviano a prophet. He goes to Vienna and tries unsuccessfully to persuade Leopold (Piotry Adamczyk) that the Turks are planning to invade, but Leopold refuses to believe him and then basically wets himself when he gets the declaration of war. D’aviano winds up at Vienna and helps rally resistance to the Turks.

The film also exaggerates the military imbalance to make the Turks more threatening. Mustafa commands 300,000 troops, not 150,000, and appears to have way more artillery than the Austrians do. When Mustafa sets up his camp, the Tatar commander warns him that they could be attacked from the Kahlenberg, but Mustafa scornfully refuses to seriously consider the possibility. The Turks successfully sap the walls of Vienna in at least one spot, which doesn’t seem to have happened.

Apart from these deviations, the film basically gets the story right. It focuses at some length on the political complexities of the Imperial side, with the argument turning on German reluctance to allow the Polish Sobieski (Jerzy Skolomowski) to command the troops. Sobieski resolves the dispute by threatening to leave if he is not allowed to command and by declaring his intention to lead his cavalry over the Kahlenberg. Clearly, the screenwriter really liked this whole Kahlenberg issue and wants to make sure that the viewer understands that Mustafa was arrogant and Sobieski was a brilliant commander. 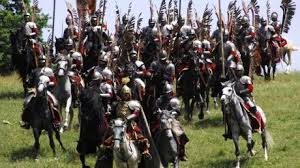 The charge of the Winged Hussars down the Kahlenberg

But the film is weakened by a variety of problems. It invents the detail that when they were both young men, Mustafa met d’Aviano in Venice and saved his life, in exchange for which d’Aviano gave Mustafa a wolf’s tooth as a good luck charm. Do you get the irony of Mustafa saving d’Aviano and then d’Aviano successfully opposing Mustafa so that Mustafa is defeated and gets executed? Do you? Cuz it’s really cool and ironical and stuff, so the film is going to make sure you get it.

And then to add to this, the film invents a Turk, Abu’l (Yorgo Voyagis), whose name is gibberish Arabic, meaning ‘Father of the’. (Abu is a common element of Arab (not Turkish) names, given to a man after his first son is born.) But Abu’l has no children in the film, just a deaf-mute wife who is able to understand people when THEY TALK REALLY LOUD TO HER. No joke. Abu’l lives in Italy for some reason, and d’Aviano saves him from an Italian mob after the declaration of war. But then Abu’l decides he has to leave his wife and go join the Turkish army where Mustafa decides to trust him. As a result, there are repeated dramatic scenes when Abu’l runs into d’Aviano, and then his deaf-mute wife, then d’Aviano again, and then disguises himself as Mustafa and gets himself shot repeatedly by the Austrians, thus fulfilling Mrs. Mustafa’s dream, because foreshadowing and irony and all that.

For me, though, the biggest problem with the film comes with its production values. Normally, I don’t factor in production values when I’m deciding what I think about a movie. Cheap production values do not invalidate a good story (see lots of original Star Trek and Doctor Who episodes). But the producers here clearly decided that their sets couldn’t quite stand up to close scrutiny, so they used very cheap CGI to overlay many scenes with falling snow, billowing smoke and dust, and other atmospheric effects. Not only does this call attention to the cheapness of the production, but it actually makes many scenes hard to see and renders watching them a headache.

Another flaw with the script is that Abu’l is the only character to undergo any appreciable character development, and he’s mostly just a jerk with no clear motivation most of the time, so rescuing his wife from a Turkish rape-stockade looks like growth. D’Aviano, despite being the main character, never really learns anything, and while Mustafa gets an appropriate comeuppance for his arrogance, he never seems to reflect on his mistakes.

The death of Kara Mustafa

Overall, it’s nice that the film wanted to tell the story of what is arguably one of the great turning point battles in Western history. The film gets the job done adequately from that standpoint. But as a movie, the only real drama for the viewer is who’s going to win the battle of Vienna, and the film constantly nudges the viewer in the ribs and says “look at this! Mustafa’s gonna lose cuz he’s arrogant and misunderstands the prophecy!”, which ruins the only suspense the film can generate.

So I don’t recommend this movie because meh. But at least it’s not Dragon Knight.

Day of the Siege

If you want to know more about the Battle of Vienna, check out The Enemy at the Gate: Habsburgs, Ottomans, and the Battle for Europe

5 thoughts on “Day of the Siege: Meh”