In my last post I dug into what we know about the race/ethnicity of ancient Egyptians. In this post, I want to dig into the accusations that Exodus: Gods and Kings (2014, dir. Ridley Scott) was whitewashing its story. 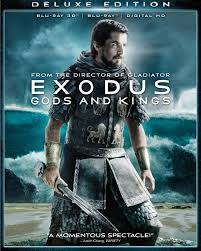 The story of the Exodus involves two distinct groups, the Egyptians and the Hebrews. The Egyptians of the 19th dynasty period, as I explored last time, were probably somewhat ethnically mixed and would probably look to us like Middle Easterners, perhaps with some Nubian features. Ramesses II, according to a French analysis of his mummy, was fair-skinned and red-haired, and therefore might have looked somewhat more ‘white’ than the people he ruled over. The Hebrews of the period would definitely have looked Middle Eastern. 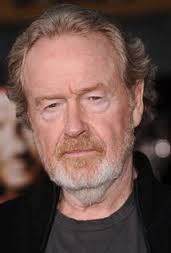 So who did Ridley Scott cast in his film? (In this list, I identify the actor’s country of origin, his or her ancestry to the extent I can determine it, and my subjective opinion of what ‘race’ the actor appears to be based on publicity photos) 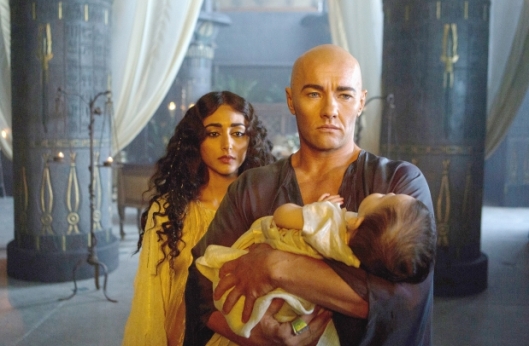 Farahani and Egerton as Nefertari and Ramesses

Here are the Hebrews: 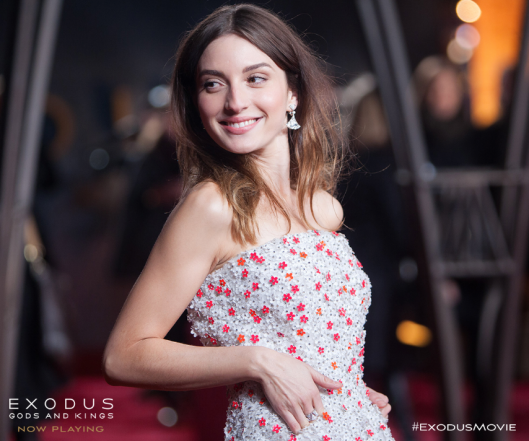 (I classified Varma and Kingsley as looking ‘mixed’ because in different photos they can appear variously as White or Middle Eastern.)

So the major Egyptian characters (those who appear in multiple scenes, have a decent number of lines, or play an important role in a scene) are almost entirely played by white actors. Of the non-white actors, only Farahani’s Nefertari is presented as a significant character, and objectively it’s not a large part. Varma’s unnamed Priestess does appear in several scenes, usually with a line or two in each, but I wouldn’t call her an important character.

Of the Hebrews, the only character of significance played by a non-white actor is Nun, played by the mixed-race Kingsley, whom most Americans probably think of as a white actor. Malikyan’s Jethro does play a prominent role in a couple of scenes when Moses is meeting Zipporah, but disappears into the background after that. 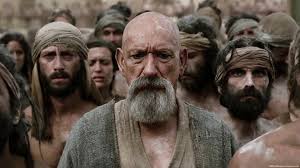 The only characters of any significance at all played by actual Middle Eastern actors are Nefertari and Jethro, neither of whom is truly a key figure in the film. 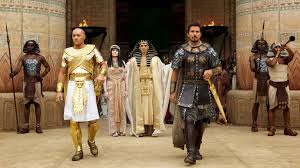 This photo perfectly captures the racial make-up of the cast

Now, as far as Ramesses, Seti, and Tuya are concerned, one could possibly make a case for casting white actors in those roles. As I noted in my previous post, Ramesses II seems to have been fair-skinned and red-haired, although his statuary suggests he might have had Nubian facial features. One of Seti’s few statues depicts him with thin lips (the nose is missing), and his mummy certainly suggests that, at least in terms of facial features, he could have passed for European, although what he looked like in life is a guess. About Tuya we don’t have much to go on. But if Ramesses was fair-skinned, at least one of his parents might have been as well. So if Ridley Scott had wanted to, he could have said something like “Based on the best evidence we have, Ramesses II and his parents appear to have looked European, so in the interests of historical accuracy, we decided to cast white actors in those roles.” It might not have been a very good answer, but at least there would have been a little historical support for it.

But that’s not how Scott responded to accusations of whitewashing. What he actually said was “I can’t mount a film of this budget, where I have to rely on tax rebates in Spain, and say that my lead actor is Mohammad so-and-so from such-and-such….I’m just not going to get it financed. So the question doesn’t even come up.”

I’ll give him credit for admitting that money and studio politics were a major factor in his casting decisions. What he’s basically saying is “Look, the studio and the financial backers wouldn’t let me do a big budget film with non-white leads, so I didn’t even consider casting non-whites in the important roles.”

But I don’t buy it. He’s insisting that because he was making a blockbuster film, he needed actors who can really pack theaters, and whether we like it or not, big name white actors ‘open’ movies much more reliably than non-white actors. But let’s look at the big names in that cast list again.

Christian Bale is undeniably a hot actor, having done Christopher Nolan’s Batman trilogy in the past decade. So Bale can definitely ‘open’ a big film effectively. Sigourney Weaver is a wonderful actress and probably still a household name, but she hasn’t carried a major film since 1997’s Alien Resurrection, or perhaps 1999’s Galaxy Quest if we’re being a little bit charitable. Ben Kingsley, like Weaver, is a marvelous actor and highly respected, but his only ‘big’ film was 1982’s Gandhi. Like Weaver, he mostly adds prestige to a film rather than drawing the kinds of audiences blockbusters require. Joel Edgerton is nice actor (you might remember him as the lead from 2005’s Kinky Boots or in 2012’s Zero Dark Thirty), but he’s not a huge box office draw; I didn’t even know the actor’s name when I saw the film. Aaron Paul is best known from Breaking Bad, so maybe he brought in some fans of that series, but I doubt the studio was banking on him; he’s in a modest supporting role. And after that we get to character actors like John Turturro and Indira Varma. So Bale was cast for his ability to carry a blockbuster. Weaver, Kingsley, and Turturro add some gravitas, but probably weren’t critical to getting the financing for the film, and Edgerton, the number two lead, seems sort of like an afterthought.

Bale in front of a painfully white-looking Sphinx

When you look at in that light, Scott’s defense reads much more like an excuse. He’s shifting the blame for his casting choices onto the nameless suits of the Hollywood system and essentially saying he had no control over whom he cast. Sure, Bale was the anchor; the film wasn’t going to get made without him, so we probably just have accept that Moses had to be played by a white guy. But Ramesses could probably have been played by almost any young male actor, and certainly Seti and Tuya could have been anyone who could plausibly have been presented as Ramesses’ parents. They could even had cast Tuya as a different race from Seti. And they could have cast Joshua, Aaron, and Zipporah with Jewish or Middle Eastern actors, since only Aaron Paul has any significant name recognition at all. Scott’s defense rings mostly false, and I think the real issue is that he just didn’t want to be bothered to go to bat with the studios and try to produce a more ethnically-appropriate cast.

For me, there’s one thing that seals the deal, that really demonstrates that Scott didn’t particularly care that he was whitewashing his film and producing a cast that makes no historical sense whatsoever. 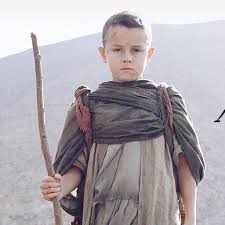 That’s Malak, the manifestation of God/angel/boy/figment of Moses’ imagination that speaks for God. This character could have been played by literally ANYONE. The character could have been any race whatsoever, could even have been played by a young girl. The character is entirely made up, so he could look however Scott wanted. No one was going to the film to see the total unknown who played Malak (except presumably that actor’s family), so casting for box office draw wasn’t an issue. If Scott had cast a Yoruba child, a Sudanese, a Latino, a Haitian, an Arab, a Japanese, or an Eskimo, it’s not like the studio could say, “There are no angels of color. God has to be white.”

But Scott cast this kid:

Isaac Andrews is a lily-white English schoolboy. That’s right, Scott choose a white kid to represent God. Even Cecil B. DeMille’s 10 Commandments, made at the height of 20th century American racial insensitivity, didn’t dare to make God white. So in addition to all the actually important and authoritative characters being white, so is God. Whitewashing doesn’t get any worse than that.

10 thoughts on “Exodus: Gods and Kings: Does It Whitewash?”