The majority of The Physician (2013, dir. Philip Stölzl, based on the novel by Noah Gordon) takes place in and around Isfahan sometime in the later 1020s, as we watch the Englishman Rob Cole (Tom Payne) studying medicine at the hospital run by the great Muslim intellectual Ibn Sina (Ben Kingsley). I really applaud the film for choosing a settling so unfamiliar to Western audiences, and for trying to depict one of the cultural glories of medieval Islam, namely its Golden Age, when Muslim intellectuals were at the forefront of human knowledge, well beyond Western Civilization. The film’s prologue text even foregrounds the superiority of Islamic medicine over Western medicine. Given the current tendency in the West to view Islam as a religion of violent, intolerant extremists, such an attitude is a nice corrective. 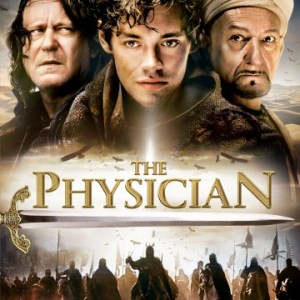 The film also deserves some credit for showing some of the religious complexity of the Islamic world. In the film, Isfahan is a Muslim city but it also hosts Jews and Zoroastrians. And the film acknowledges that the different religions are judged according to their own laws rather than Muslim law. So the film makes an attempt to show the relative tolerance that characterized Muslim society.

Unfortunately, that doesn’t mean that the film actually gets things right. In fact, the film rather subtly undermines its message of Islamic medical superiority with its choice to make its hero an Englishman. And the film wildly bends the facts at a couple of key points.

One of the major crises of the film occurs when the Bubonic Plague breaks out in Isfahan. People start dying, naturally, and the shah orders the gates locked, trapping everyone inside. But the brave scholars of the hospital reject the chance to leave before the gates are shut, deciding that they will stay and treat the sick.

Eventually, Rob realizes that the disease is transmitted by rat fleas, so Ibn Sina orders the use of rat poison and all the rats die, effectively ending the plague once the bodies are burned. There are problems with that idea; the poison isn’t likely to kill all the rats (especially since rats are notoriously cautious about what they eat), and the fleas that prefer to host on rats are more than capable of hosting on humans, since that’s how the disease gets passed to and between humans. 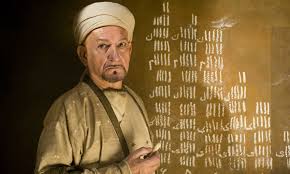 Ibn Sina (Kingsley) tracking the number of deaths from the Plague

Oh, and there’s also the small problem that there was no outbreak of the Black Death between the 7th century and the 14th century. This epidemic is entirely fictitious. (But, to  be fair, it’s not inconceivable that the Bubonic Plague could have broken out somewhere in this period.)

But the real problem to my eyes is that in a hospital full of Persian, Arabic, and Jewish scholars, including Ibn Sina, who is explicitly presented as the greatest living medical expert in the world, it’s the one plucky European who figures out that the Plague is transmitted by fleas. So while the film is presenting Islamic medicine as being superior to Western medicine, it takes a Westerner to figure out how to apply Islamic medicine to treat the problem.

During the epidemic, Rob suggests dissecting a corpse to see if the buboes could be surgically excised, but Ibn Sina refuses, saying that Islam forbids dissection. The lack of anatomical knowledge due to a supposed ban on dissection of corpses is a theme in the film. But although contemporary Islam does see medical dissection as a problematic issue, most contemporary experts on Islamic law agree that it’s permissible with a few limitations, and there’s no clear evidence that medieval Muslims were much different. A number of medieval Islamic medical experts supported the practice. So it’s unlikely that Ibn Sina would have refused to dissect a body in the middle of a medical crisis if doing so offered hope of a potential treatment.

But after the epidemic, Rob meets an elderly Zoroastrian man who is dying. When he learns that the Zoroastrians place no value on a person’s corpse, when the man dies, Rob hides his body in an ice cellar and over the next several weeks gradually dissects the corpse and draws what he sees.

However, there’s a villainous mullah in Isfahan, one who is in league with the Seljuk Turks who want to conquer Isfahan, and the mullah has agreed to cause trouble in the city. The mullah’s motives aren’t really clear, except that he’s a fanatic who thinks the shah is too lax. The mullah despises the hospital for being unislamic and orders his men to search it. They find the dissected corpse and drag Rob and Ibn Sina in front of the mullah, who sentences them both to death.

There’s a lot wrong here. It’s a wild misrepresentation of how Muslim communities operate. Mullahs are Shiite religious expects; they lead mosques, deliver sermons, and perform a variety of rituals that make them very loosely the equivalent of a Christian priest or minister. But like Christian priests, they have no legal authority and no power to compel people to obey them. The medieval Islamic court system was staffed by qadis, men who were trained in sharia (Islamic law) and then appointed to their office by the local ruler to act as a judge. Some mullahs were qualified to act as qadis, and vice versa, but the two offices were as distinct as a priest and a judge are today. And the villainous cleric is definitely a mullah; he’s shown preaching sermons in a mosque. So the mullah would not have any more legal authority to order someone’s execution than my Lutheran minister father did. And it’s highly unlikely that the shah would have allowed the execution of his star physician anyway. And, so far as I can tell, mutilating corpses was not a capital offense in medieval sharia. But, if I have learned anything in writing this blog, it’s that in the cinematic past, clergy just made up the law as they went, so they could use religion to justify absolutely anything they wanted.

However, before Rob and Ibn Sina can be executed, the shah’s men arrive. The shah is having an attack of “side sickness”, Ye Olde Timey name for appendicitis, which won’t be medically recognized for another 500 years. And of course, appendicitis requires invasive surgery, which can’t be done without a good knowledge of anatomy, so there’s nothing to be done. Except that, totes coincidence!, Rob has just acquired a good knowledge of anatomy by dissecting that corpse. So Ibn Sina helps Rob operate on the shah and save his life by removing his appendix.

Again, the film glosses over a number of big problems here. Sure, Rob has learned a lot about anatomy, but how does he know that ‘side sickness’ is caused by the appendix as opposed to any other organ, and how does he know that removing the appendix is the right way to treat the condition? How do they deal with the problem of blood loss in an age that has no ability to perform transfusions? They drug with shah with opium to anesthetize him, so at least the script considers that issue. But the whole scenario is just wildly implausible.

And once again, the film resorts to the Westerner saving the day by employing Islamic medicine in a way that Muslims weren’t able to do, in this case because their religion is an obstacle to the advance of science. The greatest physician in the Muslim world is reduced to helping his English student perform an operation because the Englishman has miraculously surpassed him just by cutting open a corpse. So after establishing the superiority of Islamic medicine, the film subtly reasserts the notion that Islam is an obstacle to science.

And that view of Islam as backward is reinforced by the villainous mullah, who hates the hospital simply because it’s unislamic in some unspecified way. This point is driven home because, while Rob and Ibn Sina are operating on the shah, the mullah’s men are ransacking the hospital and lighting it on fire, and, for good measure, they attack the Jewish quarter as well, killing a lot of the Jews and burning down the synagogue. Rob conveniently finishes up the operation in time to rescue the Jews trapped in the synagogue’s mikvah. So once again, our Western hero saves the day from the forces of Islamic irrationality.

The film wants to show how scientifically advanced and religiously tolerant the Islamic world was, but it still somehow manages to fall prey to the clichés about Muslims being fanatical, hostile to non-Muslims, and anti-intellectual, and it resorts to the trope of the Westerner rescuing all the non-Westerners who are simply incapable of making the intellectual leaps that he is capable of.

Oh, and One More Thing

When Rob Cole gets back to England, he founds a hospital, 300 years before such things will exist in Western Europe. Have I mentioned lately that I hate this film?

34 thoughts on “The Physician: Getting More Things Wrong”