Ok, after my last post about Stonewall, I’ve recovered enough to get back to The Physician (2013, dir. Philip Stölzl, based on the novel by Noah Gordon). Our protagonist, the anachronistically-named Rob Cole (Tom Payne) has gotten himself to Isfahan in Persia because he wants to study medicine with Ibn Sina (Ben Kingsley), whom he’s been told is the greatest physician in the world. He discovers that Ibn Sina maintains a hospital in the city where he teaches students and treats patients, up to and including the Shah Ala ad-Daula (Olivier Martinez). So who was Ibn Sina? 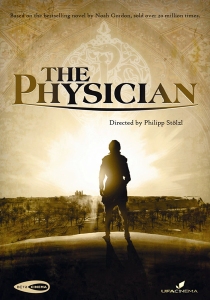 Abu ʿAli al-Ḥusayn ibn ʿAbd Allah ibn Al-Hasan ibn Ali ibn Sina (d.1037) was one of the giants of medieval Islamic culture. (Incidentally, his name translates to “Father of Ali, Husayn son of Abdullah son of Hasan son of Ali son of Sina” so ‘ibn Sina’ isn’t his ‘last name’ in the Western sense; instead it’s a patronymic, sort of like ‘Lars’ son’, my last name.)

He was born in the Central Asian town of Bukhara in modern Uzbekistan around 980 and enjoyed a remarkably cosmopolitan education, studying mathematics, philosophy, medicine, and fiqh (Islamic legal scholarship). Over the course of his life he worked as a physician, scholar, and eventually advisor to Ala ad-Daula, the ruler of Isfahan. Although known as a great intellectual and physician, he was also known to be arrogant, and extremely fond of both wine and slave girls. Later in life he suffered from colic, which in this case was probably either gallstones or kidney stones. The condition eventually killed him in 1037, perhaps due to a serious blockage or infection of the affected organ. 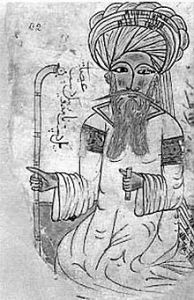 However, his true importance lies in his writings. He wrote at least 450 works, around half of which still survive. His two greatest works were medical treatises, but more than a quarter of his writings dealt with philosophy. He wrote on psychology, metaphysics, epistemology, logic, mathematics, physics, alchemy, astronomy, kalam (Islamic theology), music, and poetry. In particular, he was profoundly influenced by the writings of the ancient Greek philosopher Aristotle, whose works had continued to circulate in the Arabic world even though they had mostly been lost to Western Europe.

He was certainly celebrated for his medical knowledge; he was the first to diagnose meningitis, for example, and his Canon became one of the foundational texts for pharmacology in the medieval period. But it is his impact on philosophy that is probably his greatest legacy. He is generally considered the greatest Muslim philosopher, and he applied his understanding of Aristotle to analyzing and interpreting the Koran and kalam, a path that later Muslim philosophers followed him down. Indeed later Muslim intellectuals of a more religiously stringent mindset accused him of heresy for trying to apply the principles of pagan philosophy to matters of divine revelation.

Another important element in his legacy was that his writings were translated into Latin and began to circulate in Western schools in the early 12th century, right at the beginnings of the Western intellectual revival that occurred with the establishment of the first universities. Avicenna (as Ibn Sina was known in Latin) exercised an enormous influence on Western understanding of Aristotle’s ideas. Thomas Aquinas, for example, was profoundly influenced by Avicenna, which means that Avicenna has had an influence on modern Catholic theology. In fact, some scholars of philosophy consider him the most influential philosopher ever, although I’d be inclined to give that honor to Plato or Aristotle.

Ibn Sina in The Physician

Noah Gordon focuses almost exclusively on Ibn Sina’s work as a physician. He’s presented as running a large hospital dedicated in equal measure to treating the sick and teaching students. In one scene, he and his students discuss astronomy, but apart from that, the film entirely omits Ibn Sina’s other intellectual interests. And the film also gets his personality wrong, making him a gentle, humble, open-minded man rather than the rather intellectually arrogant man he actually was. And it portrays him as a fairly traditional Muslim when both in his intellectual work and his personal life he was more than a little unorthodox. But Kingsley gives a wonderful performance, if you like the whole ‘wise teacher’ trope. Kingsley is pretty much the best part of the film. 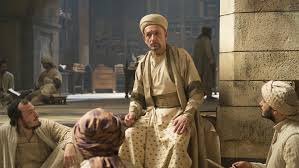 The film also completely misrepresents his death. In the film, a riot breaks out in which the hospital is burned. Rob frantically searches for Ibn Sina and finds him in the library, staring at the burning books. He tells Rob that he has taken poison, gives him a book, and then readies himself for death as Rob leaves. This is 100% untrue, as I’ve already explained.

The film deserves major props for trying to introduce this incredibly important but largely unknown figure to Western audiences. In an age when Islam is mostly associated in Western minds with religious violence and the oppression of women, it’s refreshing to see a film that wants to look at Islam’s great intellectual heritage. It’s too bad the film couldn’t find a way to address the importance of Ibn Sina’s philosophy, but that would probably have blurred the film’s focus a great deal, and honestly, this film isn’t good enough to pull that off anyway. So I guess I’ll have to be content with a nice performance by Ben Kingsley. But as we’ll see in my next post, the Isfahan sequence has way more problems than not getting Ibn Sina exactly right.

If you want to know more about Ibn Sina, a good introduction to medieval philosophy in general would be the appropriately-named Philosophy in the Middle Ages, which has a whole chapter on him. You might also consider this short biography of the man, although the author is not a scholar.

10 thoughts on “The Physician: Who the Heck is Ibn Sina?”