So I watched the first season of Netflix’ new Daredevil, and there was something history-related that I kept thinking about as the season went on. Obviously the series is set in the present day; the characters all have current cell phones, Matt Murdock has assistive technology to help him use a computer, and everything else about the context seems to speak to 2015. So on the surface it would seem to have nothing to do with my blog. But let’s look at the context of the original source material.

Daredevil #1 debuted in 1964. It tells Daredevil’s origin story. In that version of events, Matt Murdock is blinded as a child, trains to fight once he realizes that his other senses have been heightened, and goes to law school. While he is in law school, his father ‘Battling Jack’ experiences a career revival that leads to pressure from the villainous Fixer to throw his fight; when he refuses to throw the fight, he wins, and the Fixer has him murdered. His funeral is followed almost immediately by Matt’s graduation from law school. He decides to become Daredevil and tracks down the Fixer, who dies from a heart attack while fleeing him.

Matt must be in his mid-20s when he graduates law school; let’s say he’s 24, assuming he went directly from his undergraduate degree to law school. Since the story is pretty clearly set in 1964 (most Marvel comics of the period sought to be contemporary, even if generally they avoided explicit dating), that would put Matt as being born around 1940 and being blinded around 1949. Obviously there might be a little wiggle room here, but it’s pretty clear that Matt was a child of the 1940s and 50s. Jack Murdock’s career would have flourished in the 40s and perhaps early 50s.

The story is set very explicitly in Hell’s Kitchen, which at the time was primarily inhabited by blue-collar families of Irish immigrants, although large numbers of Puerto Ricans began to move in during the 1940s . Many of the residents worked as longshoremen based around the West Side docks and warehouses (many of which were used as illegal breweries during Prohibition). Hell’s Kitchen was an extremely violent area, nicknamed “the most violent area on the American continent.” Irish gangs were prevalent, and there was an Irish mafia as well. However, by the end of the 1950s, Hell’s Kitchen was in decline economically. Developments in the shipping industry led to the decline of the West Side docks and a consequent rise in unemployment in the area, with the result that the later 60s and 70s saw the area drop into poverty, squalor, and many of the associated social ills that come with poverty. West Side Story, which debuted on Broadway in 1957, was inspired by Hells Kitchen and its gangs, although the story’s exact location is not specified.

Jack Murdock makes perfect sense in that context. As an uneducated Irish man, he would have had few opportunities other than manual labor, and being a prize fighter might have been a way to make extra money or earn more money than being a longshoreman. By the 1950s, African American boxers were coming to predominate in the sport, but there were still a number of high-profile boxers of European extraction. In particular, it seems plausible that Jack Murdock might have been inspired by Jake LaMotta, a boxer of Italian descent who was a major figure in the 1940s but retired in the early 1950s; in 1960, LaMotta alleged before a Senate committee that he had been paid to throw a fight against Billy Fox in 1947. It seems plausible to me that that claim might have been in Stan Lee’s mind a few years later as he was dreaming up Matt Murdock. Since Jack Murdock is washed up by the later 1950s, he would still make sense as a white boxer in a sport that by the 1960s had few big name white fighters. And Matt’s childhood in the violent, poverty-stricken Hell’s Kitchen makes sense as well.

But Charlie Cox’ Matt Murdock didn’t grow up in the 1940s and 50s. As a mid- to late-20s guy who just graduated from law school and opened his practice in 2015, he must have been born sometime around 1990, give or take a year or two, and must have had his blinding accident around 2000 or so.

But Hell’s Kitchen in the 1990s was a far cry from Hell’s Kitchen in the 1940s and 50s. Gentrification set in during the 1980s. The blue-collar Irish American and Latino families were mostly displaced by a more affluent group of residents living in new or refurbished apartments. By 2000, the average household income in the district was around $72,000, nearly twice what it had been in 1990. After 9/11, new zoning laws allowed high rises to replace most of the strip clubs. The most notorious gang in the district, the Westies, was broken up in 1986. Today, the residents of Hell’s Kitchen are ethnically quite mixed, and mostly young professionals. There’s a growing gay community there as well. The Daily Show and The Nightly Show with Larry Wilmore tape there, as did The Colbert Report. And three subway lines service the eastern side of the area (which might explain why Ben Urich didn’t want to do a story about whether Hell’s Kitchen could get a subway line). 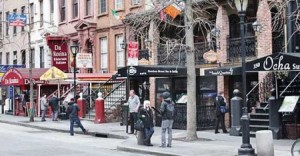 The gritty hell-hole that is Hell’s Kitchen today

Yet somehow, despite all of this, the Hell’s Kitchen that Matt Murdock and Foggy Nelson grew up in was a still a gritty hell-hole of poor working class families. Matt used to listen to all the police sirens and try to imagine the story behind each one. Elena’s apartment building is shabby and at least some of the residents are junkies. Jack Murdock, who apparently died sometime in the early 1990s, is still a white prizefighter despite a distinct lack of big name white boxers in the sport during the period. In other words, despite the accoutrements of 2015, the story is still set in the 1960s.

In a television series as well-written as Daredevil, I found the constant anachronism of the setting to be just a little jarring. Every time Jack Murdock appeared or Matt or Foggy made a reference to how rough their childhood was, I found myself knocked out of the moment by a momentary awareness that these characters didn’t quite make sense in 2015. But Daredevil as a character is integrally tied to Hell’s Kitchen. It’s part of his mythology in much the same way that Batman is inexorably linked to Gotham and Superman to Metropolis. Despite his special senses, he’s really just an ordinary guy from a poor district of New York fighting to make his slice of the city a more livable place for the other little people around him. He’s basically a blue-collar Batman, and his blue-collar nature is a big part of his initial success as a character. So the show couldn’t take Daredevil out of Hell’s Kitchen; instead, they just had to hope the audience wouldn’t notice that the Hell had been taken out of Hell’s Kitchen.

A few commenters on a different site have said that this post is just nit-picking. I suppose from one perspective that’s true. The show’s depiction of Hell’s Kitchen is a small issue. But I want to point out a couple things.

1) I haven’t said this is a bad show. I’ve said it was well-written, but that I found its approach to Hell’s Kitchen to be slightly jarring. To me, true nit-picking is saying that something isn’t good because it’s got a minor flaw. What I’m saying is that this is a generally intelligent, well-written show that has a small issue. And to be clear, I like the show. I enjoyed most of the performances. I thought that the show’s take on Wilson Fisk was an intriguing one, and I found Charlie Cox to be a good Matt Murdock. I would have liked another episode or two in which Murdock deals with the Japanese side of the problem (dispatching Nobu so quickly seemed a bit abrupt). Madame Gao was a bit too ‘Wise Asian Elder’ for my tastes, but having her serve as the spiritual advisor to the bad guy was an interesting take on the trope. However, since my blog is about history, I usually assume that my readers aren’t really interested in my general opinions about that sort of thing, so I usually keep such comments to a minimum unless they’re somehow relevant to my larger point. Unless the film or show sucks. Then I can’t contain myself.

2) My blog explores the various ways that history and film/tv intersect. Often I look at the way a film or show mischaracterizes historical events. But in this show, what I noticed is that the history of the comic book character was creating a discordance with the show because the show came out 50 years after the comic started. So what I find interesting here is the way that the comic’s historical context can’t be completely replicated in the show because in a different context, some details just don’t quite make sense. So I’m showing you what one specialist trained in history is seeing that someone less knowledgable about history might not notice. It’s the same thing as asking a physicist what she thinks about the latest Star Trek film or an entomologist what he thinks about that Ant-Man trailer. What does the specialist see that the non-specialist might not? If you think my comments are worthwhile, great–you’ve learned something. If you think I’m too fussy, great–you’re free to form your own opinion and you’re welcome to discuss that with me.

3) If you read the comments on this post, you’ll notice that a native New Yorker noticed the same issue I saw, and actually was a little bit harsher about it than I was.

I got nothin’. It’s not even available on Amazon, although the 2004 Ben Affleck Daredevil is.

11 thoughts on “Daredevil: Putting the Hell Back in Hell’s Kitchen”