Happy Easter! My first look at 1953’s The Robe focused on the film’s treatment of religion. But I thought I’d toss in a few thoughts about its attitude toward the Roman Empire, which is, shall we say, negative. 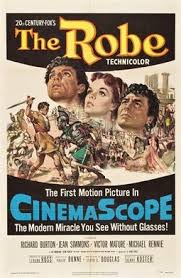 The film opens with scenes of Rome while Richard Burton’s Marcellus Gallio provides an opening voice-over. He begins by emphasizing how the empire is “master of the earth” and has “the finest fighting machine in history.” But then the mood shifts. He tells the audience that Rome receives tribute from the peoples of 30 lands: gold, silk, ivory, frankincense, and above all slaves, so many there are more slaves than citizens. Some say that Rome does nothing but loot, that it makes nothing for itself. As he tells us this we see the tribute arriving, and then finally Marcellus walks through the slave market, where whole families are being sold.

The scene serves three purposes. First, it establishes Marcellus as being somewhat jaded and cynical about Rome. Second, it sets up the conflict between Marcellus and Caligula (Jay Robinson), who gets angry because Marcellus gets the winning bid on a slave Caligula wants.

Finally, the scene tells the audience that the Roman empire is an evil empire. It establishes that Rome is essentially parasitical, producing nothing but soldiers, which enables it to dominate other peoples and live off what they produce. The slave market is, by 50s standards, decadent and cruel. The slaves are physically exposed; the female slaves mostly wear skimpy chainmail bikinis and similar outfits that expose a great deal of their bodies, in contrast to 50s norms that a woman’s torso and upper legs should be covered. The slaves are scared, but their owners are hawking them like cattle.

Two girls for sale in the slave market

When Caligula appears in the market, he does so in a procession of perhaps 50 soldiers and courtiers, who are simply there to herald him. Everyone fawns over him and defers to him, except Marcellus, who clearly disdains Caligula even though he’s going to be the next emperor. Marcellus’ refusal to kowtow is intended to establish him as a virtuous man, even though he’s also a playboy womanizer.

When Marcellus gets home from the market, his father, Senator Gallio, chastises him for provoking Caligula. Gallio says that he is “fighting for what’s left of the Republic against the tyranny of the emperors.” So he’s like an earlier version of Gladiator’s Senator Gracchus (in fact, I wouldn’t be surprised if The Robe had some minor influence on Ridley Scott’s film). This idea doesn’t go anywhere. We barely see Senator Gallio again and his resistance to the emperors is never mentioned again. But it tells the audience that the emperors are tyrants and anti-Republican.

This criticism of the Roman Empire is repeated in various ways throughout the film, to build the contrast between Christian morality and Roman corruption, but by the time Marcellus and Demetrius (Victor Mature) get to Jerusalem, the film settles into its major critique of the Empire, that it’s unjust. In the Jerusalem baths, Marcellus humiliates a wine merchant he owes money to, throwing the man’s money into a pool so that one of the other soldiers can push the man in for the amusement of the crowd. When Demetrius tells Marcellus that Jesus will be executed even though he is innocent, Marcellus’s response is essentially that this doesn’t matter; if the governor has condemned the man, he must be executed regardless of his guilt or innocence.

The Crucifixion, however, causes Marcellus to begin doubting, and when he puts on Jesus’ robe afterward, he is immediately wracked with guilt. Demetrius pulls the robe off, condemns the Empire and Marcellus for their injustice, and flees. His growing sense of the Empire’s fundamental injustice is the hole through which Christianity slowly enters his heart.

This theme of injustice climaxes in the trial scene, in which Caligula accuses Marcellus of sedition against the Empire. The charge is absurd; Marcellus has literally done nothing seditious except rescue Demetrius for the torture chambers under Caligula’s palace (because, of course, emperors must have a torture chamber in their basement; a separate building for it isn’t evil enough). All Marcellus has done is act as a missionary. He tells Caligula that he is indeed a Christian, but they are not seditious. He says that Jesus is a king, but not of this world; rather he is a king of men’s hearts. He points out that the empire is run by men, and men make mistakes, an observation that horrifies Caligula, who apparently thinks that infallibility is an inherent trait of emperors. Marcellus kneels and swears loyalty to Caligula but refuses to renounce Jesus, for which Caligula sends him to a firing squad (an arching squad?).

Marcellus on trial before Caligula

In his few scenes, Caligula is depicted as a sneering, deranged lunatic who cannot tolerate any opposition. He gleefully shows Diana (Jean Simmons) the torture chamber in which Demetrius is being tortured in an absurdly complex machine designed to press boards against different parts of his body. Diana is, as 50s heroines must always be, too delicate to bear the sight of any suffering whatsoever, which is intended to reinforce Caligula’s inhuman cruelty. When he learns that Demetrius has escaped, he rages so much I was wondering if he was going to have a fit of apoplexy right there on the screen.

Would you trust this man to run your country?

The film makes no effort to understand how Roman society saw itself. There’s no sense of the various social forces that caused the collapse of the Republic, and the Republic is, at least in Senator Gallio’s mind, still a viable alternative to the tyranny of the Caesars. Diana comments that perhaps at one point the Caesars had noble blood, but by Caligula’s day that noble blood has turned to poison.

It’s clear that 1950s audiences were expected to identify with the Christians and, more subtly, with the now lost Roman Republic, America being a Republic after all. The film could have been written as a warning to Americans that Republics can be lost to injustice (remember, 1953 was the height of McCarthyism and the Red Scare), but it seems more likely that audiences were expected to see the Roman Empire as a stand-in for the Soviet Union. In American minds, both were non-Christian, immoral, unjust societies built on political tyranny and the refusal to respect the rights of others, and which engaged in show trials whose verdict had nothing to do with guilt or innocence. The film doesn’t explicitly make the connection; Jay Robinson looks nothing like Josef Stalin, for example. But it seems likely to me that the comparison was at least vaguely intended, if only because the Cold War tended to influence everything in 1950s culture one way or another. But it’s also possible that audiences might have seen a shadow of Nazi Germany in this version of the Roman Empire. But the fact that the film wants to de-emphasize Judaism leads me to think that wasn’t the main comparison.

As I’ve emphasized before, movies about the past are almost always movies about the present. They comment on trends of the day, they critique social practices, they reassure the audience that its values are good, and so on. The theme of the Crucifixion made Roman justice or lack thereof an obvious issue in the story, and that resulted in a film that makes statements about 20th century societies and their relationship to justice even without trying to.

The Robe is available in multiple formats through Amazon.

3 thoughts on “The Robe: The Evil Empire”