The first season of The Vikings deals with the fall-out from Ragnar Lothbrok’s (Travis Fimmel) raid on Lindisfarne in 793 AD. As the show structures it, this was the first Viking raid on the British Isles. It’s followed up in a later episode with a second raid, which seems to be happening the following year, in which the would-be raiders are met at the beach by a royal official. Ragnar tries unsuccessfully to convince the man that they are merchants who wish to trade, but eventually his men prove impatient for violence and so they kill the official and most of his men. So as the series frames it, Ragnar is the first man to go Viking to the west.

Ragnar and crew on the English beach

What is a Viking Anyway?

As a side note, many people mistaken use ‘Viking’ as a synonym for ‘Norse’. ‘Norse’ is an ethnic and cultural term, much like ‘French’ or ‘Latino’ today. ‘Viking’ on the other hand, refers not an ethnicity but to an activity or occupation. Vikings are those who leave home and look to acquire resources to bring back home. These resources could be food, treasure, slaves, or anything else that might be valuable. But they were not inevitably acquired by plunder. Many sources make clear that Vikings traded as much as they raided, and in some cases probably decided which activity to engage in based on how powerful the other side was. In some cases they raided one day and then a few days later traded away the goods they had taken for things that were more useful. This means two things: 1) Not all Norse were Vikings, any more than all New Yorkers are stock brokers. 2) Since there is a little evidence of Norse women directly participating in raiding parties, it is a mistake to speak of ‘Viking women’, Lagertha notwithstanding, or even ‘Viking culture’.

Ok, Now That We’ve Gotten That Out of the Way

The show’s sequence of raids is in fact backward historically. While the raid on Lindisfarne is often talked of as the first Viking raid on Britain, the Anglo-Saxon Chronicle, one of the most important English sources for this period, tells us that four years earlier, a group of Norsemen landed at Portsmouth in Southern England. The king’s official rode out to greet them, assuming they were merchants coming to trade with the king. Instead they killed him. This incident is the earliest recorded incident of its kind. The Anglo-Saxon scholar Alcuin, living at Charlemagne’s court, claimed that the raid on Lindisfarne was unprecedented, so even if it was not the absolute first such attack, clearly it was one of the earliest of any importance. The Norse had certainly launched earlier raids down into Frisia and Francia, but it seems clear that the raids in 789 and 793 marked a turning point, because after them we have records of raids occurring every few years somewhere in the British Isles.

One of the major questions that scholars have wrestled with is why the Norse begin to raid more aggressively in this period. What changed in Scandinavia around this period? The Vikings’ answer is that Ragnar Lothbrok acted like a Norse Columbus, discovering that there were lands to the southwest that could be raided. As I mentioned in an earlier post, this is a ludicrous claim. But the question is an important one.

And, unfortunately, there’s no clear consensus on the answer. Some scholars have connected the beginning of the Viking raids to a shift in climate that made Scandinavia colder, thus creating pressure on the food supply and forcing some Norsemen to resort to aggressive raiding to acquire food and other resources. Others have suggested it might be related to political shifts in Scandinavia, as the slow emergence of small kingdoms may have driven dissenters out of Scandinavia; conversely, ambitious men might have started raiding seeking the resources that would allow them to expand their political power. One of the most interesting theories emphasizes the development of naval technology. Germanic boats dating to the pre-Raid period do not show unambiguous evidence of sails, but the surviving ships of the Raid period all have sails. As a result, it has been suggested that the Norse developed sails in the generation before 793, so that it was the development of sailing technology that enabled the Viking raids to occur. Unfortunately, that theory, as tempting as it is, depends on archaeological reconstructions of pre-Raid boats, and the evidence is unfortunately unclear.

So while the Vikings’ explanation for why the Viking raids started is wrong, it’s at least addressing a serious scholarly debate, either intentionally or unwittingly.

How to Crew Your Longship

Another hypothetical issue the show has addressed has to do with the way longship crews were organized. At the start of the series, Earl Haraldson (Gabriel Byrne) apparently exercises tyrannical control over the Viking raiders. He owns the ships, sends the men out to raid without accompanying him, and then claims the majority of the plunder when they return home. I’ve already talked about what’s wrong with that model. When Ragnar seeks to raise a crew, he offers a very different model, in which all the men on the ship are equal. It’s not exactly clear what this means in practice, because Ragnar actually makes all the leadership decisions, but the suggestion is that the men are sharing the plunder or at least keeping what they take for themselves.

Historically, Ragnar’s model has a lot in common with the actual model used by Viking raiders, at least so far as we can tell from the sources. The ship was apparently owned by an individual, who acted as the captain and leader of the warband. He recruited men into a felag, a joint partnership, sort of like a temporary business partnership. The members were called felagi (cognate to the modern English ‘fellow’) and were expected to share both the risks and the benefits of the partnership on a roughly equal basis. The details are sketchy; the owner seems to have made the major decisions, but he might have consulted his felag for advice or to see how much risk they were willing to take. He was expected to share the risks his men took, particularly by leading them in fighting; his bravery set a standard for theirs. He also probably got a larger share of the plunder, since he owned the ship that made the whole thing possible. 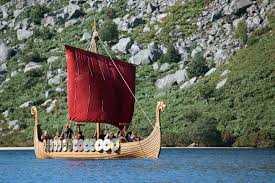 What this means for the show is that the series is suggesting that Ragnar Lothbrok was the innovator who created the felag system and that his model caught on because it was more appealing to the Norse than Haraldson’s old system. It’s highly unlikely that the felag system had a formal inventor. Norse society, with its higher degree of egalitarianism probably simply evolved the system naturally. But it’s not inconceivable that one leader invented the system using practices that already existed (the use of the felag was not restricted Viking raids; it was a basic economic arrangement in many situations). Nor is it entirely inconceivable that the emergence of raiding felags might have contributed to the start of the Viking raids. So it’s not impossible that Ragnar Lothbrok might have invented a system that enabled the start of the Viking raids. That is, if Ragnar Lothbrok had been a real person, which he probably wasn’t.

It’s also worth pointing out that when Ragnar emphasizes equality on his ship, the series is engaging in the same sort of handwaving that 300 and Braveheart employ. They start a wonderful-sounding modern virtue, like ‘freedom’ or ‘equality’, but never actually define what that virtue actually means. The purpose of this is to align the modern viewer with the hero, because they both share a common value. Having established viewer identification, these shows and movies can then completely ignore the value whenever it’s not narratively important, which allows the show or movie to contradict its own stated values without addressing the problem. So Leonidas proclaims Spartan freedom despite the fact that he is the only Spartan who ever actually uses his freedom in any meaningful way. Wallace proclaims freedom and then is outraged when the Scottish nobles use their freedom to decide that they prefer Edward I. And in The Vikings, Ragnar declares that everyone on the ship will be equal and then proceeds to make all the important decisions himself. At the end of the season, despite his much-vaunted equality, he declares his ‘fealty’ to King Horic (even though fealty is an 11th century French concept involved in an explicitly hierarchical lord/vassal relationship).

This is a rather cynical exploitation of modern values, typically aimed at American males who presumably will just sit back and enjoy the violence and sex while not thinking about the way their values are being used to manipulate them. The Vikings, to its credit, does briefly wrestle with its own contradictions, when Rollo asks Ragnar about the leadership arrangements. Ragnar replies that they will always be equal, but then proceeds to make all the leadership decisions himself. The unfortunate effect of this is to emphasize that Ragnar is actually out for himself and doesn’t mean what he says about his brother. But maybe that’s why his brother isn’t sure he can trust Ragnar in the first place.

Vikings Season 1 is available on Amazon.

The best primary source for the Viking raids on England is the The Anglo-Saxon Chronicle, which is actually 9 different records with a common source. It’s a very bald narrative, and there are lots of challenges to understanding it, but it’s a good source to read.

8 thoughts on “The Vikings: Was Ragnar Lothbrok the First Viking?”