Well, except everyone actually. Contrary to a line in Elizabeth: the Golden Age (2007, dir. Shekhar Kepur), the preparations for the Spanish Armada were well-known across much of Europe, and the timing of the invasion was actually a subject of considerable public debate. So when the Armada finally set sail for England, very few people were surprised. 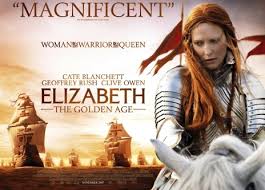 Philip II was not only the king of Spain; he was also the ruler of the Spanish Netherlands. But the Dutch Protestants there had rebelled against Spanish rule in the 1570s, with the active aid of the English government. Elizabeth recognized that it was to her advantage to disrupt Spanish control of a territory that was, after all, directly across the English Channel from southern England; it would be a comparatively easy thing for Spanish forces in the Netherlands to launch an invasion of England.

The plan of the Armada when it finally set sail in 1588 was to sail a fleet of 130 ships up the English Channel to the Netherlands, where the Armada would act as protection for a small fleet of barges that would carry about 30,000 Spanish troops across the Channel to act as an invasion force. Since the English army was mostly composed of new recruits, once the Spanish army landed on English soil, a Spanish victory was almost assured. The English correctly realized that the only opportunity to defeat the invasion was to prevent the Armada from meeting up with the Spanish troops in the Netherlands and thereby prevent a crossing.

When the Armada reached English waters, it had a brief opportunity to trap the much larger English navy in Plymouth harbor (because the tide was against the English), but the Duke of Medina Sidonia, who was in charge of the Armada, passed up the chance, which proved to be the great mistake of the campaign.

The English navy, led by Lord Howard and Sir Francis Drake, led two minor skirmishes, in which they were able to capture a few ships before the Spanish reached Calais and took up a tight formation. But they were unable to meet up with the Spanish army before the English sent in a number of fireships, burning ships filled with explosives. The Spanish cut their anchors to avoid the fireships, and the result was that their formation was badly disrupted.

The next morning, the two navies engaged at Gravelines. Although the Spanish ships had more powerful guns, they were so tightly packed with supplies that once the guns were fired, it was nearly impossible to pull them in for reloading. So in the battle, the Spanish tended to fire once and then seek to close in to board the English ships. But this was thwarted by the superior maneuverability of the English ships, who were able to stay just out of range and repeatedly fire their guns. When the wind changed, Medina Sidonia was able to escape to the north-east, with the result that the Armada, which had only lost a few ships, was unable to meet up with the Spanish land forces. So the battle of Gravelines entirely defeated the strategic goal of the Armada.

Instead, the Armada was forced to begin the circumnavigation of the British Isles. Without anchors, however, the fleet proved vulnerable to the remarkably stormy weather; a number of ships were lost off the Orkneys, and due to a navigation error, a large portion of the Armada was driven onto the rocks of the western Irish coast. Only about half of the Armada returned home. The war itself continued on until 1604, but the major battle of the war had already been fought, and the Spanish had lost.

The Armada in Elizabeth: the Golden Age

The film quite drastically distorts the Armada Campaign. The basic strategy of the Armada is explained relatively accurately. But once the Armada shows up in the English Channel, events start to diverge. The English fight a couple of minor skirmishes with the Armada, but the result is a loss of English ships, not Spanish ships. The film emphasizes that the English ships are outnumbered, and cannot afford any losses, when in fact the English navy was considerably larger than the Armada.

The Spanish drop anchors to maintain a tight formation, and then conduct a massive religious ceremony, which means that they don’t notice the fireships being sent against them. As a result, many of this ships are lit on fire (instead of mostly evading the fireships). Then a large storm sets in, and that’s pretty much the end of the conflict. The actual battle of Gravelines is not shown, although there is fighting before the fireships are sent in. There is no explanation that most of the Armada survived the battle of Gravelines, nor is there a depiction of the Armada circumnavigating the British Isles.

The film inverts the roles of Sir Francis Drake and Sir Walter Raleigh (Clive Owen). In reality, Drake was the Vice-Admiral of the English navy and fought at Gravelines, while Raleigh acted as an advisor to the queen but did not actually participate in any of the fighting. In the film, Drake stands in the background and barely speaks during council meetings, while Raleigh is one of the leading captains of the battle and personally (and more or less single-handedly) sails a fireship into the Spanish Armada, leaping off and swimming to safety when it explodes.

When word reaches Philip that the Armada has been defeated, he is immediately abandoned by both his daughter and the clergy around him, and he begins to lament his pride and beg God’s forgiveness. The suggestion is that the war was immediately over, instead of lasting for another 16 years.

Almost two weeks after the battle of Gravelines, after the Armada had been driven northward, Elizabeth gathered an army at Tilbury, near the mouth of the Thames, in case the Spanish army in the Netherlands found a way to cross over. At Tilbury, she gave what has become the most famous speech of her life, the so-called Tilbury Speech. She was wearing a white dress with a breastplate over it, and was mounted on a white horse.

Three different texts of the speech survive, but most scholars accept that the latest copy of the text, dating from 1624, is likely to be the most accurate one, and this is the version that widely known. Here is a fairly close (though not exact) version of the speech, from a BBC miniseries The Virgin Queen (2005, dir. Coky Giedroyc).

In EtGA, Elizabeth (Cate Blanchett) delivers a speech before the battle of Gravelines. Here the breastplate has become a full suit of armor.

As you can see, EtGA’s version of the Tilbury speech bears almost no similarity to the actual speech, with the exception of Elizabeth’s statement that she is resolved to live and die with her troops. In particular, the speech omits what is probably the single-most famous thing Elizabeth ever said, “I know I have the body but of a weak and feeble woman, but I have the heart and stomach of a king”. This is an example of how Elizabeth frequently maneuvered herself across the dividing line between male and female, variously presenting herself in masculine or feminine terms as she found useful. It’s possible that they omitted this line because she makes a similar statement in Elizabeth, but it seems unlikely that the audience would have remembered that.

Instead, the screenwriters have simply invented a new speech for Elizabeth, one that sounds more than a little like the St. Crispin’s Day speech from Henry V. It’s not a very good speech; it reeks of the sort of machismo that has become so common in contemporary action films, and has nothing of the grace of the original speech. Part of the problem here is that the film wants the Spanish threat to end with the defeat of the Armada, doesn’t want to have to point out that the war continued after Gravelines, and and doesn’t want to deal with the problem of the Spanish army sitting in the Netherlands. So instead of showing us the Tilbury Speech in its proper context, the film relocates the speech to before the defeat of the Armada, and uses it as a way of building up anticipation for the coming battle. But the result is a little clumsy, since it prepares us for a land battle that never happens.

What the film’s version of the Tilbury Speech chiefly emphasizes, I think, is a tendency for modern screenwriters to not recognize good historical material when they see it. It’s a little like a film about Abraham Lincoln and rewriting the Gettysburg Address because modern audiences would probably find the original speech dull.

If you want to know more about the Spanish Armada, you could start with The Spanish Armada: Revised Edition, which combines history with the insights offered by maritime archaeology.

4 thoughts on “Elizabeth: the Golden Age: Nobody Expects the Spanish Armada!”