I mentioned in my previous post on Elizabeth (1998, dir. Shekhar Kapur) that the film reduces the complex political issues around Elizabeth’s (Cate Blanchett) marriage choices to a question of personal interest. Her indecisiveness is depicted entirely as Elizabeth wavering between a man she loves but knows is unsuitable and a repugnant suitor who would be a good choice politically. While her personal feelings were probably an issue in her choice, the real reason for her refusal to commit was she recognized that whichever choice she made would bring with it at least as many problems as advantages. There was no truly good choice for Elizabeth to make, so she changed the terms of the problem and made refusing to choose the best option. Doing this forced her to endure substantial pressure from her Privy Council, her Parliaments, and other European monarchs, as well as to defy social convention, so her choice required her to develop a variety of strategies for successfully managing this pressure. 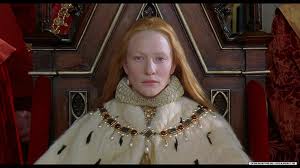 In other words, Elizabeth refused to choose a husband because she was an extremely savvy politician, not because she was an indecisive woman, and the way she enacted her choice demonstrated considerable finesse. So by downplaying the political issues and emphasizing her personal feelings, the film strips Elizabeth of much of her political skill and replaces it with a set of issues straight out of a rom-com. In a serious historical film, it’s degrading to one of the most intelligent people ever to sit on the English throne to depict her as little better than Kate Hudson or Drew Barrymore looking for love.

And unfortunately, the film does this fairly consistently. The film only shows her engaging in one piece of actual politics, when she works to persuade the English Parliament to pass the Act of Uniformity that helped resolve the kingdom’s religious problems. In the film, we see her struggling to craft and memorize a political speech that will win over the bishops in particular. On its own, this would be an interesting moment, but when time comes to give the speech, she remains hesitant and off-balance. Gradually she finds her feet, but even at the end of the speech, she doesn’t seem truly confident. We know from many sources, including her speeches, that Elizabeth was an extremely skilled public speaker. She may well have been less skilled at giving speeches when she was early in her reign, but the film never shows us a moment when her oratorical skills truly shine, which leaves the audience with the impression that she was not a gifted speech-maker.

Furthermore, during the speech the camera cuts to six Catholic bishops who are locked in a cellar somewhere, and therefore unable to participate in the voting. (This never happened.) Eventually, it is revealed that Walsingham (Geoffrey Rush) is responsible for this, and that Elizabeth won the vote by five votes; if Walsingham hadn’t intervened, Elizabeth would have lost the vote. So according to the film, Elizabeth only triumphed on this issue because Walsingham secretly stacked the deck for her, and not because she skillfully managed the members of Parliament and the bishops to win their support.

As the film constructs its narrative, at the beginning of her reign, Elizabeth is a very emotional woman who lacks inner strength and is easily distressed by the difficulties she encounters. In many of her difficult moments, she requires the intervention of a man to calm her and stiffen her resolve. When her Privy Council bullies her into war with Scotland, Walsingham advises against it, and he proves right. Later on, it is Walsingham who teaches her that she needs to be more ruthless with her enemies, and it is Walsingham who tells her that she has to do without love. So as the film structures events, one of the greatest rulers in English history wouldn’t have been great at all if she hadn’t had a man standing behind her advising her how to win and occasionally intervening to ensure her triumph. 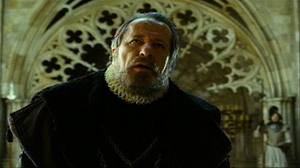 This is simply untrue. Elizabeth showed great political skill and savvy during the years of her sister Mary’s reign, when a wrong step could easily have gotten her executed. She prudently dissembled about her religious beliefs and at least nominally embraced Catholicism until she was able to admit she was a Protestant after she became queen. So she didn’t need Walsingham to teach her how to be an effective politician.

Additionally, Walsingham didn’t really become an important figure in Elizabeth’s government until the late 1560s, by which point she had already been in power for more than a decade, and had managed to enact the Act of Uniformity, begin dealing with the issue of her marriage, and confront the French build-up in Scotland; while the Scottish campaign was poorly conducted, it achieved her main goal of getting the French to withdraw most of their forces from Scotland. In all of these matters, Elizabeth generally set her own policy, often to the frustration of the men on her Privy Council. There is no doubt that Elizabeth was a skilled politician even at the start of her reign.

And then there’s the fact that for much of the second half of the film, the main plot revolves around a plot to kill Elizabeth that requires Walsingham to keep her safe. For a movie about Queen Elizabeth, the story is surprisingly dependent on the actions of men.  Indeed, in one scene, the assassin Ballard (Daniel Craig) catches her alone and gets within about 20 feet or so of her. Elizabeth is presented as helplessly demanding that he tell her his name; had other events not created a distraction, Ballard clearly would have killed her. This moment contrasts sharply with a real assassination attempt that she survived. In 1584, Elizabeth was surprised alone in her garden by Dr. William Perry, a member of Parliament and one of her spies, who had decided to kill her. But he was so daunted by her presence that he was unable to carry out the deed. (At least this is how some sources describe the incident; others suggest that he was trying to get her attention to raise his standing with her.) The notion that she was a helpless woman in the face of violence is false.

Elizabeth surviving an assassination attempt (note the emphasis on her fear)

For the film to undermine her accomplishments and attribute them to a man is, sadly, pure sexism. It feels as though the screenwriter, Michael Hirst, and Shekhar Kapur simply couldn’t imagine a strong political woman who wasn’t dependent on a man. If there was ever a woman who wasn’t dependent on men for her success, it was Queen Elizabeth I. Her story is one of a woman successfully navigating a male-dominated world and rising above the limitations men attempted to place on her. That’s a story I would much rather have seen than the one this film gives us.