One of the interesting things about Gladiator (2000, dir. Ridley Scott) is that while several of the major characters (Marcus Aurelius, Commodus, Lucilla, Lucius) are solidly historical characters, the main character, Maximus (Russell Crowe) is fictitious. Normally in historical films, it’s more likely to be the other way around, with the main character being real and the supporting cast being made-up. So let’s take a look at Maximus and where the screenwriters (David Franzoni, John Logan, and William Nicholson) got him from. 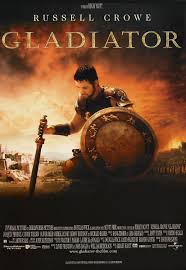 Gladiator started life as David Franzoni’s script about Narcissus, the wrestler who strangled Commodus to death in 192 AD. But Scott didn’t like the dialog, so he hired John Logan to rework the script. Logan heavily revised the first act and it’s probably at this point that Narcissus became the general Maximus. The obvious model for this was Marcus Nonius Macrinus, a successful Roman general and friend of Marcus Aurelius (not to be confused with the later Roman emperor Macrinus). Unlike Maximus, Marcus Nonius Macrinus did not suffer a humiliating fall from grace, but died a very wealthy man. In 2008, his tomb was discovered just north of Rome. Unfortunately it’s in very poor condition, and this year it was announced that the tomb was going to be reburied to preserve it until the funds can be raised to properly conserve and restore the site. Russell Crowe has gotten involved in the effort to raise funds and keep the tomb from being re-buried. (There’s an online petition that you can sign and donate to, and there’s more information about the whole situation here; watch the CNN video. One of the major problems in Italian archaeology at the moment has been the economic crisis in Italy, which has forced a sharp cutback in funding for archaeological work.) 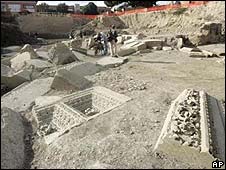 Once filming began, however, Crowe had significant complaints about the script, so William Nicholson was brought in to rework it again. Exactly what got changed I don’t know, but my guess is that it was somewhere in here that the whole ‘restore the Republic’ angle got added in, because it makes Maximus a much more virtuous character if his fight isn’t really just about a rivalry with the emperor but about a more lofty goal.

Some online commentators have suggested that Maximus owes something to Cincinnatus, a 5th century BC Roman general who briefly assumed the dictatorship of Rome during a military crisis and then promptly resigned the title and its powers to return to farming. I think that’s a bit of a stretch. Apart from both being virtuous generals who just want to return home to their farms, there’s not much to connect the two. They lived in very different circumstances 600 years apart, Maximus dies triumphant, while Cincinnatus triumphs and goes back to his farm, and one was a gladiator and the other wasn’t.

A more obvious comparison, and one that’s also been made, is Spartacus. Both were gladiators and both plan rebellion against the Roman state. But once again, there are more differences than similarities. Spartacus successfully rebelled against the Roman Republic for more than two years, whereas Maximus’ rebellion is nipped in the bud by Commodus. Maximus gets to kill Commodus in the arena, whereas Spartacus’ success was outside the arena and he was defeated by Crassus. So while Spartacus might have been the inspiration for the idea of a slave rebellion, it’s clear that the screenwriters didn’t draw too much from him.

As I’ve argued here, I think there’s an overlooked inspiration (or at least a very strong parallel) and that was the conspiracy of Quadratus and Quintianus around 183. If we change Senator Gracchus to Quadratus and replace Maximus with Quintianus, we see a lot of parallels. In both cases we have a plot against Commodus early in his reign, driven substantially by an unhappy senator and the scheming of Commodus’ sister Lucilla. Quintianus attempted to murder Commodus in an amphitheater, while Maximus kills Commodus in an arena. Both are attempting a political revolution or coup, and both fail and wind up dead. The major differences are that Quintianus wasn’t a gladiator and there was no abortive slave rebellion, and Quadratus wasn’t trying to restore the Republic (although as I’ve argued, I don’t think Senator Gracchus was actually trying to restore the Republic either).

Finally, I think another overlooked parallel is with Cassius Chaerea, the man who orchestrated the plot that murdered Gaius Caligula. While Chaerea wasn’t motivated by a desire to restore the Republic, that’s what the Senate attempted to do briefly after Caligula’s death became known. It failed when the Praetorian guards put forward Claudius. But the incident itself is quite famous, especially as a last futile Republican gesture, and this most have been on the minds of the screenwriters as they wrestled with the plot of the film over various rewrites.

So while Maximus is a fictitious character, and having a completely fictitious character as the star of a movie that claims to be historical is a serious problem, at least the screenwriters were thinking about different historical scenarios and how they might have played out in a semi-plausible way, instead of just making up whatever crap came into their heads. 300 2: Rise of an Empire, I’m looking at you.

is available at Amazon.

1 thought on “Gladiator: Anatomy of a Composite Character”