Nikolaj Coster-Waldau has been getting a lot of attention lately, thanks to Game of Thrones, so when I ran across The Headsman (original title, Shadow of the Sword, 2005, dir. Simon Aeby) on Netflix, I decided to watch it. It wasn’t really worth my time, but at least I got a blog post or two out of it.

The movie is set in Tyrol, in Austria, and opens in 1520 when two young boy-monks, Martin and Georg, climb under an executioner’s scaffold to watch an execution. They swear to be best friends, but shortly afterward the archbishop of the region orders Martin sent away, for reasons that aren’t clear. 15 years later little Martin has grown up into Coster-Waldau, now a captain in the army, and Georg (Peter McDonald) has become the prior of the monastery.

Martin meets Anna (Anastasia Griffith), the beautiful daughter of the local executioner. They quickly get some sexytime and pretty soon she gives birth to a baby, but by bad luck her father happens to die the same day, and to her dismay, she discovers that her father promised his loathsome assistant Fabio that he would get both Anna and the executioner’s job. When she refuses him, Fabio attacks her, but fortunately Martin shows up again and saves her. They get married and for some reason marrying her means that Martin can’t be a captain in the army any more, so instead he becomes the new town executioner. 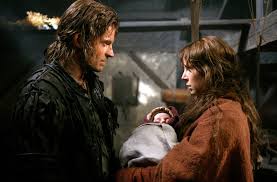 Martin is glad to see his old friend Georg again, but for some reason Georg announces that he can’t perform Martin’s wedding, so instead Martin and Anna go off and get married by an old Anabaptist heretic who lives in what appears to be some sort of refugee camp for displaced heretics in the woods.

The actual plot finally kicks in when Fabio’s girlfriend/wife/pity fuck/deranged housekeeper steals a pyx containing a consecrated host from the monastery (which apparently hasn’t ever learned that doors can be locked or barred). She does this because she’s hoping it will ruin Martin so that Fabio can become the executioner, but as it turns out, one of the monks, Brother Bernhard, also has some sort of reason for not wanting people to figure out what’s happened, and so the theft of the pyx gets blamed on the Anabaptist who performed Martin’s wedding, who gets arrested and Martin unfortunately has to torture and execute him.

Fabio and his…whatever she is

After this an anti-Anabaptist pogrom gets going, and the archbishop pressures Georg into declaring a ban on printed books. Hitherto unrevealed to us, this unnamed town is apparently a center of printing, so there is a long sequence in which books are knocked off tables, shops are broken into by guards, literate people have their houses ransacked, and paper is burned.

Then the evil Spanish Inquisitor (Steven Berkoff) shows up. He’s named Inquisitor in the credits, so apparently his parents had a really clear idea what sort of career they wanted for him. We know he’s evil because he dresses all in black and shaves his head. He starts ordering Martin to do things like pull out prostitutes’ tongues with pliers, and once Anna gets arrested, the movie spirals toward a conclusion so predictable and boring that it’s not really worth talking about.

According to Wikipedia, the film was nominated for the Grand Prix des Amériques at the Montreal World Film Festival in 2005. I’m assuming that this prize is self-nominated, because I honestly can’t imagine any serious film critic watching this mess and thinking “Wow! That was one of the best films I’ve seen this year! I think it deserves a prize,” unless the Grand Prix des Amériques is a sort of Darwin Awards for film.

1520 isn’t the Middle Ages anymore, but I’m not sure the film-makers know that, because they trot out a number of clichés usually reserved for the Middle Ages. Within 5 minutes of Martin’s return to this town, we’ve seen a woman squash a cockroach, blow her nose into her hand and then knead the remains of the bug into the dough with her dirty hands; a man tries to sell Martin an amulet to ward off the evil eye; and a couple of children throw vegetables at Anna and call her a witch. In case you didn’t know, we’re not in the present anymore, Toto. We’re in the Middle Ages, and people were icky and stupid back then.

Anna’s character is a particular source of medieval-film clichés. She’s the daughter of a poor executioner, and lives in a shack outside of town. Despite this poor upbringing, she’s literate and interested in books (another plotline the film just forgets about partway through). She’s a healer whose mother taught her all about herbs. This too is more or less forgotten after she’s had a stock Erotic Wound Cleaning sequence that leads to her hook-up with Martin. At first it looks like she’s supposed to be an important character, but she mostly just serves to provide Martin with some manpain when it looks like she might get executed as an Anabaptist.

I’m gradually realizing that film-makers who work on the Middle Ages think that there weren’t any actual laws in the Middle Ages, because, as this movie nicely illustrates, religious officials have whatever powers and jurisdiction they need to have to drive the plot. Georg is the prior of his monastery (where the abbot of the monastery is I’m not sure, but some monasteries were run by priors so I’ll forgive that). Being prior of the monastery apparently means he’s allowed to perform marriages (some monks were also priests, so I’ll overlook that too), is responsible for the religious lives of everyone in the town, is responsible for rooting out heretics, and has the authority to order the confiscation of all the books. The film also can’t quite figure out who has the authority to try heretics, the Inquisitor or the town council. It’s as if people in the Middle Ages just sort of made things up as they went along (which is where screenwriters must get their inspiration).

The Inquisitor is a serious problem as a character. The movie is set in Austria, so the presence of a Spanish Inquisitor is a little odd. The film gets around this by saying that the Emperor ordered him to deal with the Anabaptists. Ok, Charles V, who was Emperor of the Holy Roman Empire in this period, was also King of Spain, but the film seems to think that the Emperor is named Werner I. I assume that the Inquisitor is a clergyman, since it’s an ecclesiastical office, but he dresses and acts like a layman, so I don’t really know what the movie thinks he is.

Another problem character is Margaretha (Julie Cox). She’s a prostitute, but apparently the daughter of someone important, because she dresses well and gets to sit in the expensive seats at the executions. She’s clearly a Bad Woman, because executions get her really turned on. Then, suddenly, when she gets arrested, we’re supposed to sympathize with her, even when she does really stupid things to dig the hole she’s in deeper, like telling the Inquisitor that she renounces God. Honey, when you’re being interrogated by a religious fanatic, it’s generally wise to keep your novel theological ideas to yourself.

The film is such a random collection of plot points it’s hard to know what you’re supposed to see as the main storyline. You’re clearly supposed to care about Martin and Georg and Anna, but that’s about all I can tell you about what the film-makers thought they were doing.

I don’t hate The Headman, the way I hate Braveheart or 300. To hate this movie, I’d first have to care a little about it, and the movie couldn’t even rouse me to anger. The best it got from me was occasionally flickers of irritation, and even that was snuffed out as the film ground to its dull, enervating end. I was just sort of hoping The Headman would put me out of my misery, like the rest of his victims.

The Headsman is available on Amazon as SHADOW OF THE SWORD

but I’m not really sure why you’d want to buy it.

5 thoughts on “The Headsman: A Muddled Mess”