On the surface, it seems obvious they are meant to be history. 300 follows the events of Thermopylae at least in outline, even though it gets pretty much all the details wrong. It has Spartans fighting Persians, it has Leonidas and Gorgo and Ephialtes and Xerxes.

300 2 makes less of an effort to follow the actual events, since it offers four battles in place of two, and situates all the battles in the open sea, except when Themistocles magically conjures up some rocks. But here too we have Athenians and Spartans and Persians. We have Darius, Xerxes, Artemisia, Themistocles, and Gorgo. Surely these are historical films that just making up lots of details to make the stories more engaging to modern audiences?

However, I would argue that in their inventions, they violate one of the basic requirements of historical film, namely that their fabrications all be historically plausible even if they are not accurate. Since there’s no such thing as a historically accurate film, we can’t make strict accuracy our measuring rod; rather we must use plausibility. As film goers, we have a right to expect that the places where the film fudges the facts be at least minimally believable, because otherwise the film breaks our suspension of disbelief. For example, if Braveheart had shown William Wallace using an Ak-47 rather than a great sword, we would immediately recognize that the film was historically false.

And unfortunately that’s what both these films do. They present details that are not only implausible, but so far removed from historical fact that their falsity becomes painfully obvious.

Artemisia is a historical person, but the cinematic Artemisia is not even remotely plausible as a character. She is a deadly assassin, highly skilled warrior, and great marksman. For those of us raised on the cinema of the 70s and 80s, it’s nice to see a strong female character who can take care of herself, but Artemisia is simply impossible as an ancient woman. There were no ‘warrior queens’ in ancient Greece or Persia. The cultures simply wouldn’t have allowed it. In doing this, the film is fitting into the modern cinematic trend of having women who can fight, which is in many ways a nice development and a move away from misogynistic depictions of women who always need to be rescued by men, but in a historical film it is implausibly false. 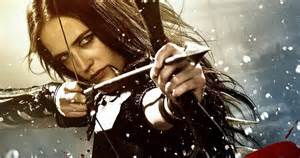 A nice example of the Fantasy Babe with a Bow trope

Yet, while Artemisia is so implausible as to be false, she is at least theoretically possible, unlike some of the other details of these films. One of the ships in Artemisia’s fleet is a 19th century ironclad, driven apparently by slave-powered screws. This is technologically impossible for the ancient period, and probably technologically impossible today as well. The movie seems to suggest that the Industrial Revolution was beginning to get underway by 500 BC, more than 2,000 years too early. Such a plot element breaks the historicity of the film in a significant way.

In other ways, it’s clear that these films cross over from an historical Earth to a fantasy Earth. Early on in 300, the boy Leonidas winds up fighting a wolf that is impossibly large, more like a sabretooth tiger, really, with glowing eyes (amusingly, the narration says its eyes are red when in fact its eyes are yellow). No animal like that existed in ancient Greece, or anywhere else in history.

Leonidas and the giant wolf

But the biggest violation of historicity in these films is Xerxes. In 300 he is presented as being impossibly tall. He’s not a giant, because his body is perfectly proportioned. He is simply 7-8 feet tall in a way that human beings pretty much can’t achieve. In 300 2, the film takes things a significant step further. Prior to the death of Darius, Xerxes is a normal man, but afterward, according to the narrative, Xerxes “gives himself over to dark powers” (I’m paraphrasing here, since I don’t have the movie in front of me); he goes to a cavern where unspecified dark gods are worshipped, swims in a pool, and emerges 7-8 feet tall and much darker-skinned than before. In other words, he’s magically transformed into a different person by swimming in this pool. At this point, which is fairly early in the film, it’s clear that the film-makers are signaling their departure from any meaningful historical reality and making a fantasy film that pretends to be historical.

300 2 also demonstrates its fantastical nature at the end of the film (and here again, I’m going from my memory of the film in the theater). During the final battle between the Athenian and Persian fleets, the narrator starts telling us what is happening in the fighting between Themistokles and Artemisia. Then the camera pans over to the Spartan fleet, which is just arriving, and we realize that the narrator is Queen Gorgo (Lena Headey), who somehow knows what is happening on another boat quite a distance away. In other words, Gorgo is apparently demonstrating clairvoyant powers. We might simply attribute this to the screenwriter having entirely lost control of the story he’s telling and forgetting that Gorgo can’t possibly know the things she knows, but I think it’s just as likely that the film simply doesn’t care about this massive gaffe because the film knows it’s a fantasy and not historical.

This is something that I’ve already criticized Boudica for. In the past decade, fantasy has emerged as a successful film genre in its own right, and film makers have typically situated fantasy stories in cultures analogous to ancient or medieval cultures. So it’s understandable that film makers telling stories set in the ancient or medieval human past would want to work in a little magic to spice up the story. But it’s important to remember that magic isn’t real and therefore has no place in an historical film. That’s not to say that ancient and medieval characters couldn’t have believed in magic or engaged in what we might today classify as stage magic, but there’s a big difference between that and Xerxes being physically transformed by a dip in a swimming pool.

Is it really too much to ask that an historical movie actually contain only elements that are historically plausible?

are available on Amazon.