In my last post, I discussed Ironclad (2011, dir. Jonathan English), a film about the siege of Rochester in 1215. There’s a lot to like about the film, despite some of its historical errors, but there’s one part about it that I find troubling, namely its treatment of its main female character. 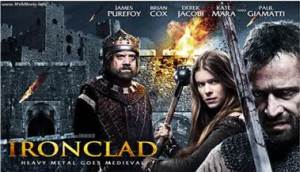 In the past few weeks, as people have reacted to the Isla Vista killings, many people have argued that the killer’s attitudes were in part the product of a culture that treats women as objects designed to serve men’s needs. It’s been pointed out that many films, especially action films, tend to re-enforce this idea. So, to help further this important discussion that’s taking place, I want to look at the way Ironclad treats its main female character, because I think it’s a good example of this extremely common, but also extremely problematic, tendency in films.

Ironclad is very much a man’s movie. It’s set solidly within the action movie genre, since the entire plot is about the siege of Rochester Castle. The extreme male-on-male violence falls into this genre as well. The cast also reflects this; it has 17 named characters, of whom only 3 are women (and one of them has such a small part I’m not even sure who she is; I think she might be an elderly lady-in-waiting). The film draws heavily off of Kurasawa’s Seven Samurai, and so its action is almost entirely concerned with the actions and choices of men, particularly its protagonist Thomas Marshall (James Purefoy). It fails the Bechdel test miserably (unless you count one line in which a lady in waiting tells Isabel to get back from a fight that’s broken out). The film is so deeply male-centric, the female characters could have been omitted entirely without affecting the plot in any way. So why are they even there?

Of the two female characters worth discussing, one of them, Agnes (Bree Condon) is a serving women at castallan Reginald de Cornhill’s household. She primarily functions as a sexual partner for one of the male soldiers who comes to the castle with Marshall. When John’s forces penetrate the bailey, she takes up a weapon and fights against them, but is killed. Her character gets little screen-time and virtually no character development, but at least she made more of an impression than the third female character.

The only important female in the film is Lady Isabel (Kate Mara), who is the wife of Cornhill (Derek Jacobi). She is a young woman married to a much older man who has no interest in her sexually. When Thomas arrives, she is drawn to him because he is such a strong contrast with her husband; Thomas is young, handsome, virile, and a strong leader and decision-maker, while Cornhill is old, hesitant, possibly impotent, and generally a weak leader. While Thomas is determined to hold the castle at all costs, Cornhill waivers repeatedly and has to be prevented from surrendering. Over the course of the siege Thomas and Isabel gradually grow closer, and eventually under her advances, he breaks his oath of celibacy and they have sex. At the end of the film, she is one of three survivors of the siege, along with Thomas and Guy, a young squire. She is last seen carried by Thomas on horseback as he rides away from the castle.

Kate Mara, wearing one of those classic 13th-century off-the-shoulder dresses

So her trajectory over the course of the film is to first be a forbidden fruit and then gradually to become Thomas’ woman. Her interest in Thomas is presented as entirely a function of Thomas’ superior masculinity in comparison to Cornhill. Thomas fights and suffers greatly over the course of the film, while Cornhill acts much like a fearful old woman. Whereas Thomas finds the internal strength to survive and fight to the end, Cornhill eventually loses his nerve and hangs himself. This is historically incorrect; he survived the siege and was taken prisoner by John after the surrender. As I’ve said before, it’s important to ask why a particular detail is ahistorical, and in this case the answer seems obvious; Cornhill has to die so that Isabel can pair off with Marshall at the end of the film. 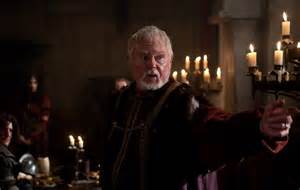 If this were as far as the film’s treatment of Isabel went, it would merely be a clichéd ending. But the film takes things a step further and makes it clear that Isabel’s function is to be a prize for Thomas. The contest in this film isn’t just between Thomas and Cornhill, after all. It’s between Thomas and King John and his villainous Viking captain Tiberius (really? A Viking named Tiberius? Sigh.) So Thomas doesn’t just ‘defeat’ Cornhill; he must defeat John and Tiberius as well, and in both cases, his prize is Cornhill’s wife.

At the start of the film, it’s clear that Thomas is a troubled man. He has some sort of secret that led him to become a Templar; this secret is never explained, but it’s clear that Thomas doesn’t really want to be a Templar any more. There is some talk early in the film of his taking a leave from the Templars (I’m not sure how that would work; is he released from his vow of chastity for a couple weeks?) Soon after his arrival at Rochester he abandons his vow of silence (which is a good thing, because a film whose central character can’t speak needs to have a much better script than this one). Then he breaks his vow of chastity by having sex with Isabel. Finally, after the siege is over, Archbishop Stephen Langton (Charles Dance) shows up and gives Thomas his freedom, allowing him to leave the Templars because he’s earned it. This is crucially important, because as a monk, Thomas cannot have a future with Isabel. So Thomas is rewarded for his successful defense of the castle with two interconnected rewards, his freedom from the Templars and his vows of silence and chastity, and Lady Isabel. In other words, he gets Lady Isabel almost explicitly because he ‘won’ the siege. She is almost literally his prize for coming in first in a masculinity contest.

Most tellingly, when the Vikings force their way into the keep for the final confrontation, Guy the squire is instructed that if the Vikings get past the last line of defense, Guy must kill Isabel, apparently so she won’t raped by the Vikings. This isn’t just a throw-away bit of dialog; Guy agonizes about this command and the film builds tension over whether he will have to carry it out. So in the film’s construction of the events, once Cornhill dies, Isabel simply becomes Thomas’ property, and if he can’t have her, she needs to be killed. In the film’s logic, Isabel must belong to the man who can defend her properly, regardless of whether this is what she wants or not, and if the film’s hero doesn’t get to live with her, her life is worthless.

Let me emphasize that. Isabel has no value of her own in this film. Her entire function is to validate Thomas’ struggle to hold onto the castle.

Thomas very subtlety implying that he has a huge schlong

The film presents this in traditional romantic terms, of course, which means that the film assumes that Isabel’s consent to be Thomas’ property is given the moment she offers herself to Thomas sexually. Having slept with Thomas, she is his, and makes no further choices. The film only gives her one motive for her choice, that she is obviously poorly suited to her husband.

The film never pauses to think that Thomas, by taking control of the castle, has essentially taken both her and her husband hostage to his determination to hold the castle. Nor does it consider that perhaps she offers herself to Thomas purely as a way to survive the siege because he’s obviously a safer bet than relying on her pathetic husband. Or perhaps she’s experiencing Stockholm Syndrome and fallen in love with her captor. Nor does it occur to the film that a poor, penniless knight is not necessarily the best choice of husband for a noble widow who has probably inherited all her late husband’s property. She is a good catch for Thomas, but what he offers her other than his virility is unexplained. But that’s because she’s not really a character in her own right; she’s a prize to be claimed by the victor of the struggle. His superior virility is enough to justify this wealthy prize.

Laid out in these terms, it’s easy to see how a film like Ironclad unintentionally contributes to the misogyny that is so powerfully present in modern American culture. Thomas, like the Isla Vista killer, is entitled to sex from the woman he wants, because her desires are entirely irrelevant. The narrative is male-centric, with Isabel functioning as nothing more than an object of desire. And if Thomas can’t have her, no one should. When films frequently fail to assign women any actual value beyond sex objects and prizes, it’s easy to see why a mentally ill man might come to the same conclusion, and then lash out at them when he fails to win them over. If he can’t have them, no one should.

Arthur Chu has done a good job of exploring exactly this dynamic in nerd culture, in his essay “Your Princess is in Another Castle: Misogyny, Entitlement, and Nerds”. Thomas Marshall gets lucky, because at the end of his adventure, his princess turns out to be in the same castle as he is.

17 thoughts on “Ironclad: The Woman as the Prize”